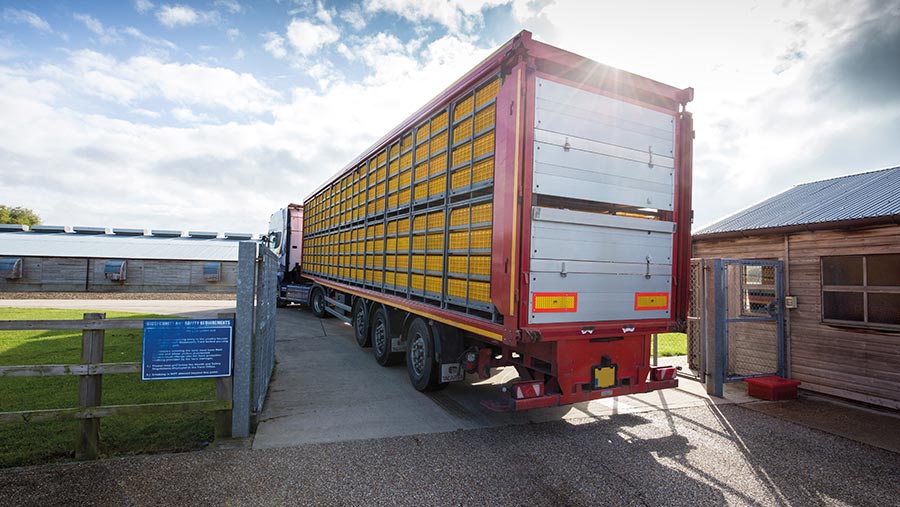 Parts of the broiler industry could be severely threatened unless the government adopts a more commonsense approach to Defra’s Improvements to Animal Welfare in Transport consultation, according to the NFU.

The union’s Poultry Board chairman, Thomas Wornham, says the government’s response to the consultation has “ill-thought-out” proposals.

Engaging with Defra on this will, therefore, be a work in progress during 2022.

There are three main areas of concern for broiler producers. These are:

Potentially the most impactful of the three areas is that broilers should be transported only when the external temperature is 5-25C, says Richard Griffiths, British Poultry Council (BPC) chief executive.

“It is almost a throwaway proposal without sufficient justification behind it. The evidence is not there. Half of all journeys fall outside of that range,” he says.

“It is very weather dependent, making it impossible to plan journeys. And the government’s suggestion of using thermoregulated vehicles – they don’t exist here yet and are not even commonly used in countries with extreme weather conditions.

“Even where they are used they have no better record on dead on arrival [DOA] than we do.”

Veterinary consultant Paul McMullan has concerns about what data this temperature range is based on, as an opinion published in 2019 by the government’s Farm Animal Welfare Committee does not refer to an outside temperature range.

It recommends an internal temperature of 22-28C for broilers and end-of-lay birds. “This is based on transporting day-old chicks. The science it [the 5-25C range] is based on is not clear,” Mr McMullan.

The choice of external temperature in the consultation poses practical issues, as broilers are often loaded at night when it is cooler.

“We catch the birds when it is dark because it is better for their welfare. If we can’t load before the temperature is 5C, we could be in trouble in autumn and winter.

“When the birds go on the lorry they should stay within the range – they are only out in the cold when moved from the shed on to the lorry.”

Lorries have curtain sides now, says Mr Bourns. “Before curtain sides, we used to lose a few broilers on a very cold night but now this is controlled. We don’t want anything to die as if it does, we don’t get paid.”

He suggests we should be looking at the temperature the birds are in when they are transported, not the outside temperature. “On a practical level, this proposal would mean that we cannot grow broilers in winter.”

“On a practical level, this proposal would mean that we cannot grow broilers in winter. In summer it is less of an issue as temperatures are not higher than 25C very often.”

In its consultation response, Defra says it appreciates that thermoregulated vehicles are currently not widely used in the sector.

“Longer term, however, the industry should aim to operate within the agreed external temperature range or use thermoregulated vehicles.

“During our further work with stakeholders, we will agree what suitable mitigations may be taken in the short term, and on the longer-term approach.”

Mr McMullan points out that there is an official veterinary surgeon at processing plants and the lairage is under their control.

“Rather than guidance based on numbers, it is more sensible to give vets on the ground responsibility for welfare. Sometimes welfare issues can arise through no one’s fault.”

The government’s proposed maximum journey time of 21 hours for day-old poultry could have a multimillion-pound impact on the broiler breeder export market.

“The UK is a global hub for breeding stock which goes all over the world – mainly to Europe, but also Japan,” says Mr Griffiths.

“This proposal could have lost the UK £170m/year. Breeding companies estimated it could have wiped out 70% of breeding stock exports.”

The latest government proposal is a maximum journey time of 24 hours. “This is better but the BPC is still questioning this limit. The impact will still be in the tens of millions.

It is journey quality rather than length which is important, says Mr Griffiths.

“Day-old, high-value breeding stock lose value instantly if there are any welfare issues; time limit is not a good measure of welfare.”

Ninety percent of global broiler lines come from the UK; it is a very important hub for high-value breeding stock.

“At the moment Defra is engaging in discussion, which is at a very early stage.

“We are laying out our concerns about the appropriateness and viability of the proposals. They are often based on outdated research and new research is needed,” says Mr Griffiths.

A maximum journey time of four hours is proposed for broiler chickens destined for slaughter.

“We believe this is a balanced approach, which takes on board the industry’s concerns about the impacts on existing journeys while addressing the scientific evidence on welfare risks and mortality rates for broilers on journeys longer than four hours.”

However, Mr Griffiths says Defra is still to decide on the detail.

“If loading and unloading are included, half of current journeys would not be permitted,” he says. “It is a point of debate, and we are trying to provide evidence.”

DOA at the factory is usually a measure of welfare, with 1.5% or more triggering action.

Mr Warnham is worried there is insufficient contingency planning within the journey time proposals. With 20 million birds being moved a week, there is often no spare capacity to send them elsewhere.

“All the processing plants are run to maximum capacity as the margins are so small. There is no slack in the system,” he says.

“I cannot overstate how important this is. If implemented, these proposals could have a massive impact for no great benefit. It could adversely affect our food supply and food self-sufficiency.”

The transport temperatures project is an important component of the NFU welfare in transport action plan.

It aims to identify industry-led solutions through data and shape future policy in this area.

“We will use the data to demonstrate how existing vehicle designs already manage internal temperatures and animal welfare, which will establish how they can be used in the proposed thermoregulation systems, and what potential there is for future innovations in designs.”