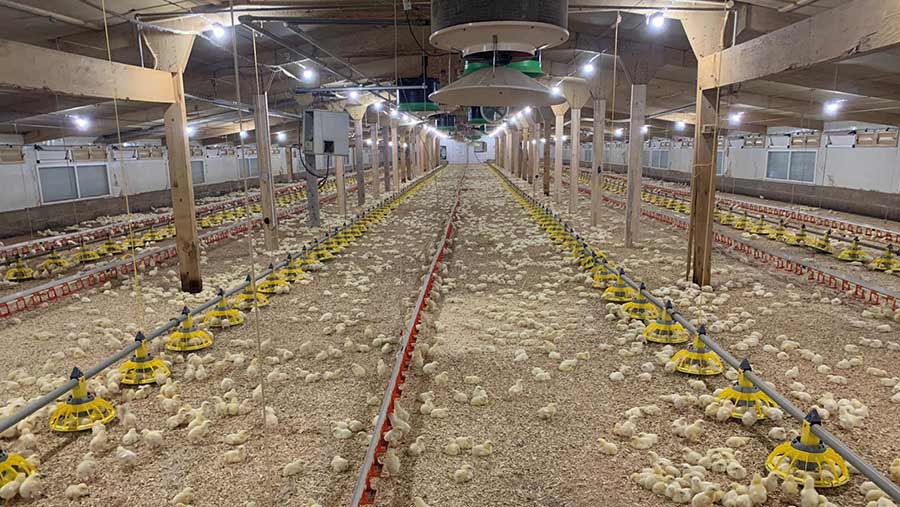 Research work has shown modern lighting systems can increase layer production by up to 38 eggs a hen and gross margins by 0.87p/kg on broiler units.

But lighting often slips down the list of potential performance inhibitors because flock-keepers assume systems are effective as long as they are functioning.

Correct lighting will stimulate the birds’ natural day/night behaviour in a housed environment, in the following ways:

One reason for the improvements in these areas is that poultry have a greater sensitivity to colours and vision on the ultraviolet spectrum, explains Greengage Lighting’s Glynn Kent.

See also: A guide on how to improve water quality on poultry units

How much of each colour is present, light intensity, and periods of light will all influence how the birds behave and perform. Getting it wrong can have implications that last the length of the productive cycle.

In contrast, layers benefit from a warm, white light with more red, which improves rates of sexual maturity and egg production. 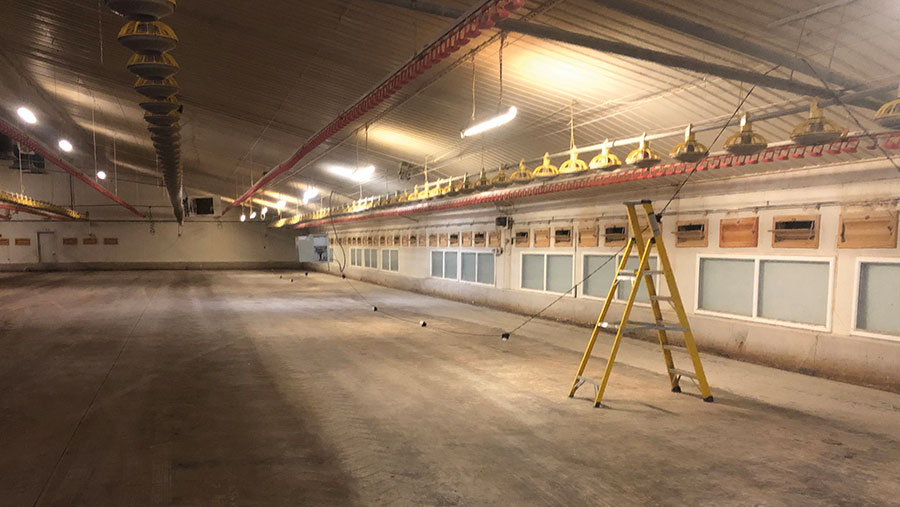 The shed before the new lighting was installed © Greengage Lighting 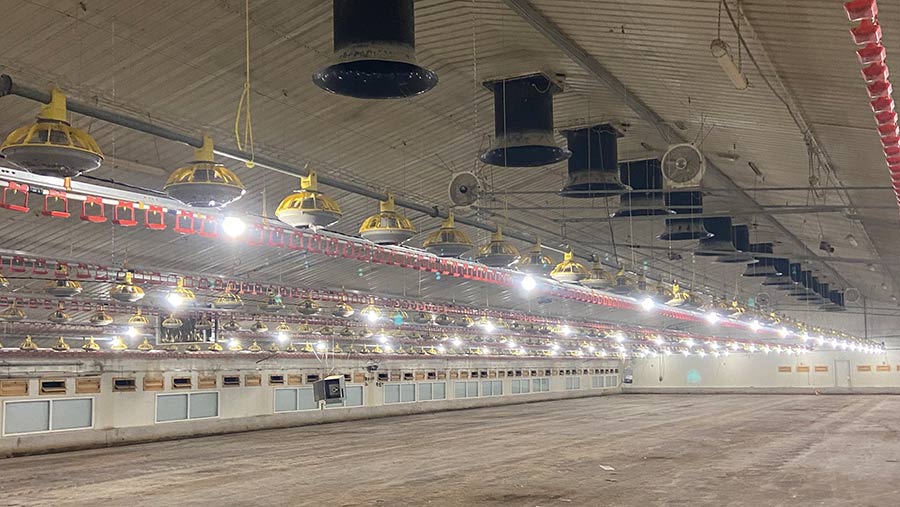 The shed after the new lighting was installed © Greengage Lighting

This means birds must work harder to navigate their environment, which increases stress and incidences of:

Conventional lighting systems have limited dimming ability and require manual inputs at each end of the day.

The running and maintenance cost of older lighting systems is also considerable, with annual bills of £1,016 in an average house (see “Comparison of energy use” below).

Additional labour costs are incurred because bulbs are sensitive to dust, ammonia and moisture, and require replacing because of water damage during deep cleaning.

LED lighting will give the producer better control over settings, allowing automatic and smoother transitions from light to dark.

“In laying systems this is of particular importance to drive the birds up to nest boxes while maintaining underlighting to discourage floor eggs,” Mr Kent points out.

Use of AgriLamp Induction System (Alis) LEDs has seen floor eggs reduced from 7.2% to 3% at peak production.

Labour requirements are also reduced by 90 minutes/day, equating to £5,145 of savings in a typical flock.

LED lighting systems range in price and cost of installation.

An electrician will be needed to install standard LED lighting, while an Alis induction LED system requires an electrician only for the control room panel. Farmers should be able to install the lights themselves.

Tom Bright and his father, John, upgraded their lighting system in late 2019 – and have seen a uniform 4g increase in chick growth at day seven as a result.

The pair have a 210,000-broiler bird enterprise at Shadwell Farm, and performance has always been a focus alongside high health – with particular attention on chick growth in the first seven days. 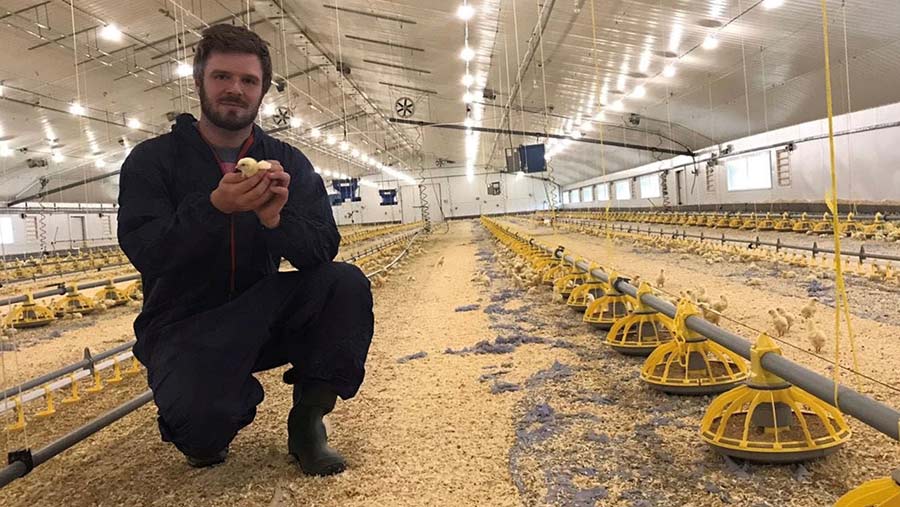 “Research shows that every extra gram of growth in the first seven days roughly translates to 5-6g at the end of the crop,” explains Tom.

“It’s really important to get crop fill in the first 24 hours, with consistent feed intakes to improve end weights and uniformity.”

Challenge
In 2019, the Brights were achieving an average chick weight of 190g at day seven but with too much variation seen in the shed.

Assessing the sheds and observing the birds, they identified lighting as a limiting factor. “The placement and output of the conventional lights didn’t allow for even lighting, interfering with the natural bird behaviour,” explains Tom.

Each shed had 45 conventional HF fluorescent strip lights, controlled by a manual time dimmer – costing about £4,200 for the system and installation, with running costs of £250.56 a flock or £1,753 annually.

“In one of the sheds, a corner and one long side was particularly problematic – we would see the chicks congregating in these darker areas, leading to variable feed intakes and growth rates.”

Lighting swap
In autumn 2019, they decided to retrofit one of their five sheds with Alis induction LED lighting, after assessing shed design and lighting placement to eliminate dark spots.

“After installation we saw a visual improvement – the whole floor space was evenly covered by light, with brightness equal at both ends of the shed and no flickering,” says Tom.

“Most importantly, we saw an immediate improvement at chick placement, with a lot less clustering and chicks feeding more off the chick paper.”

Return on investment
On an individual flock basis, growth rates to day seven have increased by up to 8g a chick, with an average 4g increase over all flocks produced under new lighting. This translates to a 25g improvement at final kill, generating 1.87p a bird, or £638.14 a flock, extra income.

The Brights have also seen their energy use drop by about £719.04/shed a year.

The system took two days to install and cost £8,800/shed. And the return on investment is strong: £5,179.02/shed based on improved performance and energy savings, ensuring payback in under two years.