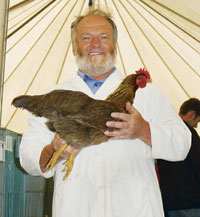 The Three Counties Show has a competition between exhibitors from Gloucestershire, Herefordshire and Worcestershire, “the three counties”, which lend this huge agricultural show its name.

This year it was won by Sheila McStay from Worcestershire with one of her Australorps. Sheila’s Australorps had a splendid day as another of her Blue bantams became Best of Breed.

She also had the champion goose but her particular pleasure came when one of her sons, Sebastian, won the junior champion with his Belgian bantam.

Sheila’s best friend, Sarah Harris, was only attending her second show so she was astounded to find that both her Hamburg and Brahma were up on championship row. Sarah was even more dumbfounded when her bantam Brahma ultimately became the soft feather bantam champion.


The Three Counties has many Welsh exhibitors and this year the Welsh certainly took home more than their fair share of the club’s silverware. Both the large soft feather championship and the reserve show championship went to Tony Phillips from Carmarthen. Tony won both titles with one of his excellent White Silkies; Tony’s son, Sam, also did well with his notable Lavender Pekins. The Reverend Sion Alun makes a habit of winning major titles and at Great Malvern he did it yet again, this time winning the True Bantam sections with one of his memorable Belgians. A huge Jersey Giant cockerel belonging to J W Parfitt from Seven Sisters took another prestigious trophy back to Wales for the Champion Rare Breed.

English pride was redeemed when the Supreme Show Championship was awarded to an Old English Game legend, Norman Blower. On this occasion he took the ultimate award with a Black bantam.

However there’s no fierce rivalry at this show; it has a truly wonderful, friendly atmosphere which was created over 32 years by Sheila and Ben Dunnit. When Sheila and Ben retired last year they left some hard shoes to fill but luckily Huw Evans and Nick Langdon were just the men to do it.

Any show secretaries who bemoan a lack of volunteers could well make a pilgrimage down to Great Malvern. Here they could discover the Three Counties secret of recruiting an army of enthusiastic, helpful volunteers who made the whole event hugely enjoyable.