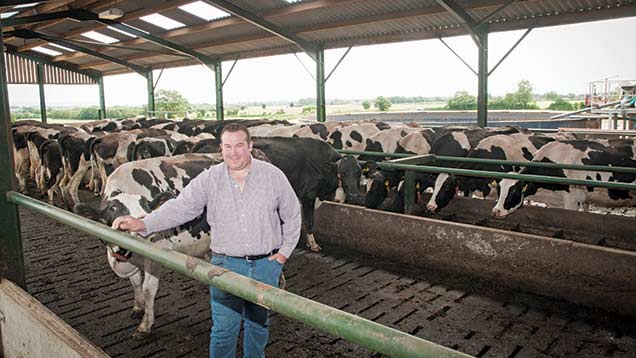 When north Yorkshire dairy farmer Tim Gibson increases his herd by half this year, he won’t be worrying about how he, together with his two full-time staff, will manage the extra numbers.

As a pioneer of high-tech farming in the dairy industry, he has streamlined his 200-cow, 81ha operation to such an extent that adding an additional 100 cows and 60ha means very little will have to change.

“My biggest worry is going to be about housing the cattle,” says Mr Gibson, who farms in Blade. “We will start producing more than 2m litres of milk with the new cows, but we are not expecting to alter the staffing situation.”

Mr Gibson started using technology on his then 100-head farm in 2001 when he installed a robotic milker, making him one of the first farmers in the country to use the technology.

In that first year alone, the robot helped his milk production increase by 18% a cow, while the amount of time it took to milk his animals was dramatically reduced.

Recognising the potential benefits technology could bring, he decided to use automation wherever it could help make efficiencies.

He now has three robotic milkers milking 24 hours a day, and will be adding a fourth when his new cows arrive later this year.

As well as cutting the amount of time staff spend in the dairy and reducing the need for additional workers, the machines act as eyes and ears on the farm, alerting Mr Gibson to any problems thanks to sensors that identify each cow by a collar.

The sensors check temperatures, milk volume and cow weight, and the data is fed back to a central computer which alerts staff to anything that is not normal.

In addition to the milking robots, he has also installed automatic scrapers and an automatic feeder – an investment he says has made a staggering difference to the farm’s operations.

“We can feed simply and quickly and it is easier to produce a TMR [total mixed ration] than using a traditional tractor format,” Mr Gibson says. “It takes us 20 minutes to feed the cows now whereas before it took much more time and labour.

“It also saves costs: diesel in a mixer wagon was costing us £60/week, but it only costs £10/week for the automatic feeder.”

The feeder works like a sushi bar, Mr Gibson says, with a conveyor belt delivering a portion of feed to cattle eight to ten times a day.

Feeding little and often stimulates the cattle to feed and milk more regularly, resulting in the cows eating an additional 2-3kg of dry matter every day and producing more milk.

“When I first installed the feeding system, our milk from forage went up by 1,000 litres a cow from the same forage, thanks to it being mixed better and the change in the way we were feeding them.

“It has also reduced waste hugely. Every uneaten mouthful is circulated through the system again until everything goes – we basically have nil wastage.”

Mr Gibson says the technology means he has been able to grow the herd in a way he had never anticipated.

“I never wanted to expand the herd as we were already working all hours and I couldn’t see how we would have time to run any more animals,” he says.

“But now I have two people each working a 45-hour week. With a conventional system, to run an operation like this I would need at least four people.

“It has also freed up more of my time, enabling me to set up my own business to advise farmers on the technology and help them implement the systems.”

As well as savings in the farm’s labour and operating costs, the technology has also helped improve herd health.

“If staff aren’t handling the cows as often, there is less chance of error in terms of bad hygiene and spreading infection,” Mr Gibson says.

“Mastitis has gone because the teats are cleaned automatically. The system also makes the cows more relaxed, so everything works better.

“We were culling on average after three to four lactations, but our culling rate has dropped from 27 cows a year to about 16 [18%].”

Mr Gibson says the investment in the technology will take seven years to pay back thanks to the savings in labour and improved output.

While the cows are producing 15% more milk, that improvement is swallowed by the costs of maintaining the machines, which cost about 4p/litre to buy and run.

But he says the cost of maintenance will come down as more spares become available and the market becomes more competitive.

“For me it is more than worth the investment,” he adds. “I now have an efficient farm through labour-saving devices.”