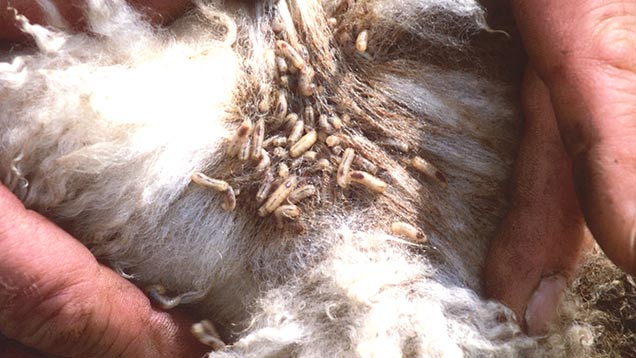 Farmers are being advised to treat for blowfly strike to prevent it becoming a problem following a rise in cases as the weather warms up.

Blowfly strike is caused by the infestation of sheep by fly maggots which feed directly on the skin of affected animals, causing serious distress and welfare problems and in some cases death.

Experts have warned farmers that prevention is better than cure because once a strike has happened sheep can die very quickly.

Overwintered blowfly larvae will begin to develop in the soil as temperatures rise above 9C, and can mature very quickly; when temperatures reach this level, the start of the strike season will not be far behind.

Blowfly larvae develop through three stages between egg and adult; it is within stages two and three that the larvae cause damage to sheep, known as blowfly strike, which can lead to production losses and welfare problems.

Fiona Anderson, technical consultant manager at Elanco Animal Health comments: “Prevention is always best in the case of blowfly strike because it can establish very quickly.

“Farmers have so many demands on their time it can be easy to miss an affected sheep.

“An infestation can be easily prevented through the use of products that contain insect growth regulators.

These inhibit the development of the damaging second and third stage maggots which are responsible for causing fly strike and stock damage.”