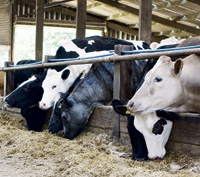 Quick finishing is the name of the game for West Country beef and sheep producer John Hoskin. He and his family finish 1000 Continental crosses and Friesian steers every year on their two units in Dorset and Cornwall. Management at turnout is geared towards ensuring nothing compromises that one simple goal.

“What we want is for everything we put into them to go towards liveweight gain. Anything that prevents that must be taken out of the equation,” says Mr Hoskin.

This makes worming a key priority. “It’s no good feeding first-rate grass to an animal with parasites.” All cattle not due to finish in the three to four months following turnout receive a bolus. The rest are treated with a pour-on. Similarly, cattle bought at the start of spring are given a bolus, while those that arrive later in the summer have a pour-on.

“You can never be sure animals bought through the open market have been wormed. We assume they haven’t and treat accordingly. It’s a cost, but one that is outweighed by the benefit.”

Mr Hoskin aims to finish his store animals at about 18-24 months old, buying them at 12-15 months. The target is to average 650kg liveweight.

He has just established a suckler unit to produce quality beef for finishing using high EBV bulls, and is keen to keep infectious diseases to a minimum.

“Bulling heifers receive a BVD and leptospirosis injection automatically before turnout. We give them the second dose before the bull going in. We haven’t had a problem with IBR, but are conscious that buying in all these cattle, there’s a chance we’ll bring it on the farm.”

Again, he adopts a preventative strategy with the main herd – “one calf lost justifies the treatment of the whole herd”.

For the store cattle, a key part of this is segregating the herd into manageable groups, which is done before turnout. “We group cattle together according to age and sex as far as we can, keeping the Friesian steers separate from the rest. We check ear tags, check against passport, then they are treated as a group. That way you know what you’ve got and can manage them accordingly.”

This also helps when managing their diet. The Friesian steers require a higher input than the Continentals. The change in diet at housing and then again at turnout is handled carefully.

“Towards the end of the autumn, we introduce a higher proportion of cereals while they are still outdoors to prepare them for the finishing sheds. Then, as turnout draws near, we ease the cereals back to nothing for the indoor store cattle, bringing plenty of grass silage into their ration so the transition isn’t too great.”

The relatively free-draining soils and dry conditions of the farm allow older cattle to be overwintered on stubble turnips. “They get a harder time outdoors, so the change on to higher-quality grass at turnout means you get compensatory growth. It’s not unusual for cattle, turned out from stubble turnips in April, to be finished by mid-June.”

His approach to grassland is to provide a thick, clover-rich ley that he stocks tightly, aiming for 2500kg/ha liveweight. “We drill at a higher rate to ensure a thick, dense sward.” Typically, this means a seed mix, recommended at 32kg/ha, will be sown at 38kg/ha.

The right quality and quantity from the sward are paramount to ensure animals put on the liveweight gain Mr Hoskin aims to achieve over the spring and summer months.

All pastures are grazed extra tightly by sheep over the winter. This ensures good, fresh growth in the spring that he stocks as soon as there is enough growth to satisfy the cattle. Turning out at the right time is key to keeping the pastures in good condition.

“Weather plays a big part – don’t turn out and spoil a ley. You’ll finish it for the year. Aim for warm, sunny days.”

He then keeps the grazing tight, but is careful not to over-graze. “Give them good, fresh leys, then they can do the job. If it starts to get away, we turn the sheep in with cattle to mop up any ungrazed growth.”

A cut of silage, wrapped into big bales, is taken from fields that get ahead.