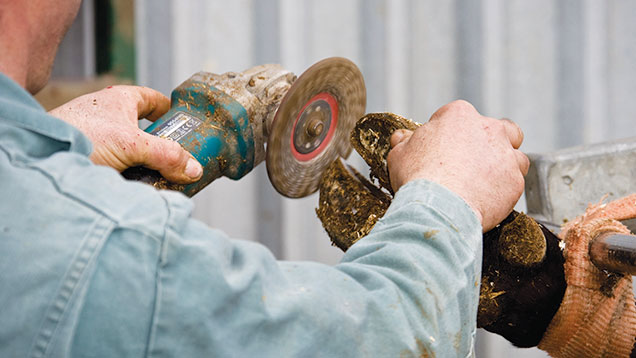 Rearing heifer replacements in cubicles and mixing them with dry cows pre-calving is preventing heifer lameness at a Gloucestershire dairy farm.

With about 180 replacements drafted into the herd annually, heifer foot health is a priority at Taynton Court Farm, near Gloucester.

Herd manager Alec Heron worked with Roger Blowey, the former vet at Taynton Court Farm, to formulate a lameness prevention plan. This includes daily foot-bathing for about two months pre-calving and biotin supplementation before and after calving.

Mr Blowey insists that protecting heifers against lameness always pays off. “If heifers go wrong they may be left with a problem for the rest of their lives,’’ he says.

Maintaining foot health is a team effort at the farm, with assistant herdsman Alistair Griffin responsible for all aspects of mobility, including prevention protocols, monitoring and treatment.

The 700-cow cross-bred herd calves all year round, producing an average milk yield of 9,100 litres/lactation. Heifers are introduced to cubicle housing from 12 months of age.

Mr Heron says it is important to get heifers used to concrete well before they are served. “We use plenty of straw and we don’t scrape out as regularly as we do with the cows because it makes the floor more comfortable. When the heifers get older, pre-calving, they go into sand-bedded cubicles.’’

Although the concrete floor surfaces of the older sheds are grooved, the floors of any new sheds are marked with hexagonal imprints.

The feed passages in the sheds are 8m wide with a 5m passageway between the rows of cubicles. “This allows plenty of room for the heifers to get around and they can get out of the way if they need to,’’ Mr Heron adds.

Heifers are reared on a separate unit and this means they are not exposed to infection from cows. Strict biosecurity measures prevent contamination of digital dermatitis by the main herd.

Pre-calving, the heifers are introduced to dry cows. “We socialise the heifers with the more mature cows to get them used to being in the herd and there is less chance of them getting bullied when they join the herd,’’ Mr Heron explains.

It also means the heifers can be trained to use a foot-bath. They are run through a foot-bath filled with a formalin solution every day for about two months before calving.

This policy was introduced about 15 years ago as a means of controlling digital dermatitis. “If we can keep digital dermatitis out of the heifers the chances of them catching it as they get older are less. It gives them a good start,’’ says Mr Heron.

Heifers that have digital dermatitis pre-calving are predisposed to the disease for the rest of their lives.

“If a heifer is infected with digital dermatitis pre-calving, she is four or five times more likely to go lame during lactation,’’ says Mr Blowey. Foot-bathing pre-calving is essential, he recommends. “Foot-bathing is to prevent infection, not to treat it.’’

Mr Blowey advises early treatment to reduce the period of lameness. “Chronic digital dermatitis leads to M4 (chronic) lesions and these are the drivers of infection within a herd.’’

Maintaining a condition score of 3.0-3.5 allows the heifers at Taynton Court Farm to maintain an effective digital cushion, especially around that critical period before and after calving.

“Heifers have thin fat pads, even thinner if they lose weight in early lactation, and the fat in the pad is of poorer quality,’’ Mr Blowey explains. Once the pedal bone has developed bony swellings it will never recover.

Standing times are minimised through careful attention to cow flow during milking.

At Taynton Court Farm, controlling lameness across the herd has paid off. There are only about one in 60 cases of animals with M4 (chronic) lesions. These animals are walked through a foot-bath twice daily.

There is no policy of culling due to lameness although the lameness incidence is carefully monitored. “We can deal with M4 lesions,’’ says Mr Heron.

Since using biotin in feed, there has been a marked reduction in white line issues in the heifers. “It seems to strengthen the foot,’’ he says.

Investment in good equipment makes foot trimming easier for staff when attention is needed between the monthly visits by a professional foot trimmer. All the cows are given a trim at drying off and at between six and eight weeks post-calving. “We don’t need to do the maiden heifers because they are usually OK,’’ says Mr Heron.