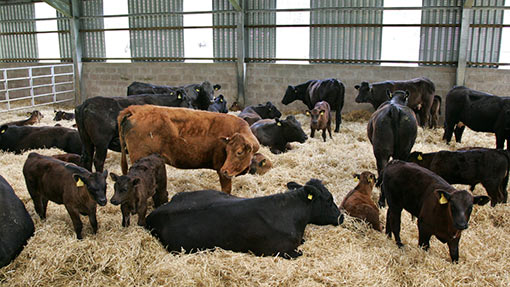 From lighting and ventilation to layout and bedding choice, the design and style of cattle housing can make a dramatic difference to welfare and productivity.

Four farmers give Debbie James the lowdown on why they chose their beef housing systems, and the costs involved. 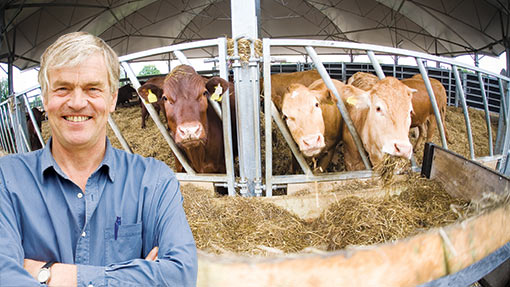 When William Alexander and his stock manager David Latham were looking at options for additional housing for beef stores, a Roundhouse ticked all the boxes.

The building needed to house 110 animals with a total weight of more than 61,000kgs and it had to incorporate effective natural ventilation.

Pneumonia had been an issue in the outdated housing at Castle Farm, Shoreham, Kent.

These were a series of rectangular buildings with small spaces and low roofs.

In contrast, the Roundhouse has a circular airy design with open sides and a “tented” roof featuring a central ventilation outlet that acts as a natural chimney, continuously drawing air into the building.

“There is air movement across the top of the cattle in all weathers, whether it is 30C on a summer’s day or -5C on a winter’s night,” Mr Alexander explains.

In addition to good ventilation, Mr Alexander wanted a building that would deliver improved animal welfare and labour efficiency.

The naturally light and open design of the Roundhouse ensures the animals remain calm and contented. “Housed animals that are free from stress have greater feed intake, resulting in faster weight gains,” says Mr Alexander.

A tractor and straw chopper blow straw bedding into the Roundhouse. About 20 round bales are used weekly throughout the winter months.

This reduces to 12 during the summer months. The Roundhouse has an integral central handling system that connects directly to every yard space. “It is perfectly feasible for the animal groups to be moved and sorted by one person,” adds Mr Alexander.

He says the Roundhouse provides the best possible housing environment for livestock.

He would make only minor changes to the present unit, such as elevating the building to allow improved drainage off the roadway.

He may also have invested in more concrete rather than compacted hardcore. “Tractors always use the same route to drive around the perimeter, leading to depressions, which later create puddles.” 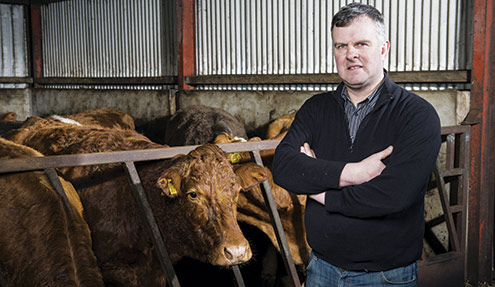 Straw is in short supply in Northern Ireland and is a reason why the region has so much slatted livestock housing.

At Cool Brae Farm, Kircubbin, cattle have been housed on slats for 40 years.

Farmer Sam Chesney, who runs a herd of 120 spring-calving suckler cows, insists his cattle are cleaner on slats than they would be on straw – unless very large quantities of straw were used.

The only straw in his system is for cattle at finishing, cows at calving and calves at housing in October. Cows go straight on to slats at housing and are grouped according to age and condition.

One of the sheds has been fitted with rubber slats, which cost £40/sq m; this area is stocked with forward stores and bulled heifers. Finishing cattle are housed there or on straw four weeks before slaughter.

The rubber area is particularly good for older cows that may be lame or stiff, while for bulls it lessens the risk of injury.

Another benefit of slats is ease of management. All the stock at Cool Brae Farm can be fed in 90 minutes.

“Feeding is quick and there is no bedding time. The savings we make on straw will pay for the slats after 10 years,” Mr Chesney reckons. “But slats aren’t cheap because you have to put a slurry tank below them for 26 weeks’ storage and tanks aren’t cheap.”

The sheds are big and open-fronted, with double doors that can be opened for air circulation. Inside there are high-energy sodium lights.

If Mr Chesney was rebuilding the system, he says he may incorporate a slatted feeding area with a bedded lying area and a handling facility at the rear.

“Even a grooved floor with an automatic scraper to scrape then pump slurry into the store seems a good idea as there would be no fumes in the shed while mixing.”

He has seen no difference in finishing performance between stock on slats, straw or rubber slats. “We were advised that on rubber slats we would see a difference of 15kg an animal over the winter period but it is negligible.” 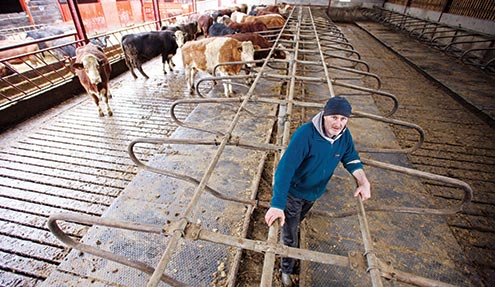 A new shed incorporating cubicles for 65 cattle and a slatted floor was built three years ago.

A key reason Mr Tudor chose to stick with cubicles was the cost of bedding. “Even when our buildings were put up in the 1970s, cubicles offered space, time and cost benefits over straw or bedding,” he says.

The design has improved considerably since the first cubicles were built 40 years ago, he said. “We have replaced the old Newton-Rigg style from the older buildings with modern cubicles.

“A lot more thought is put into the design, in particular the angle of the beds and the height of the cubicles. It has made a huge difference to making the beds more attractive for the cows.

“We went through a lot of dairy designs because the industry has put a lot of effort into getting it right. If all the design and comfort works for dairy cows it also works for beef cows.”

Rubber mats encourage the animals to spend more time lying in the cubicles, and standing too.

The only adaptation Mr Tudor made to the dairy-inspired design was to make the beds slightly shorter.

The cubicle and the mattress cost £100 a cow. “The old cubicles lasted a good 30 years and were only replaced due to comfort considerations,” Mr Tudor explains.

The shed is divided in two, with concrete railway sleepers as flooring on one side and slats on the other. “The sleepers aren’t as clean as slats but for beef cows they are effective,” says Mr Tudor.

At £32 for the same coverage provided by £118 worth of slats, they are much cheaper too.

For beef producers considering a similar design, Mr Tudor advises careful thought to slurry storage volume, and how slurry will be mixed and the tank emptied.

“The slurry is very thick because there is no rainwater mixed with it,” he says. “Our system is designed to overflow into the slurry pit and we empty it from there.”

For animal performance and welfare, no system comes close to loose straw in Neil Rowe’s opinion.

A shed for housing 350 cattle was built at Manor Farm, Abingdon, Oxfordshire, in 2009, on a site where the dairy had stood. The concrete pad was preserved and the shed was built on that.

The farm grows a large acreage of cereals so straw supply is abundant. But other factors also appealed to Mr Rowe. “I visited straw and slatted systems in Ireland and found there were far fewer casualties and injuries, such as hock damage, on straw.

“The feed conversion ratio is better too. We get 10% better performance on a straw yard because the animals are comfortable, they eat more and they ruminate more.”

The building cost £170,000, including fans and rainwater harvesting. It houses 100 autumn-calving cows with calves at foot on one side. This area is divided into four with 25 cows and calves and a bull in each. Calves have their own creep feed area that only they can access.

In another part of the building there are 150 animals, from weaned, spring-born calves to cattle at the point of finishing.

“The building is designed for 350 cattle and with that many you would expect to be injecting 40 animals a year for infectious diseases, but in four winters we have only treated one animal.

“We have designed the building with the cow in mind, not people. Cows like looking out of buildings so we have an overhang around it and our own design of feed barrier to allow us to feed around the outside.”

A 3m wide handling passage designed by cattle handling expert, Temple Grandin, sits in the centre. “We can back a lorry up to a loading ramp at one end of the central passage and load cattle in seconds.”

It takes one person less than 20 minutes a day to feed all the animals. Mr Rowe says the pens are cleaned out completely approximately every 60 days. “The cattle are contained in the handling passage and the feed barrier can be lifted in its entirety with a pallet fork and the pens bedded,” adds Mr Rowe.