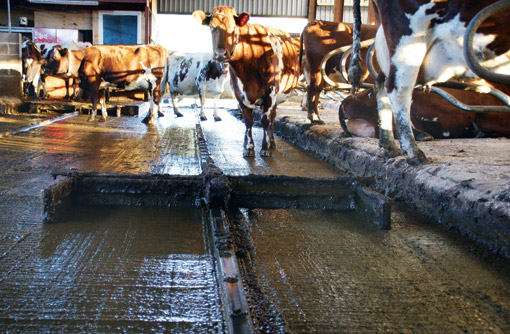 Slurry: the larger the herd, the greater the volume which needs to be handled. Andy Collings takes a look at slurry scraper systems and considers how their use can affect herd health.

When it comes to slurry handling, cubicle housing for dairy cows offers some distinct advantages – the prime one being they help to ensure all occupants have their rear ends pointing towards a central channel.

Yet, while this helps to concentrate the accumulation of slurry in an area which can be more easily cleaned, there remains some differences of opinion on just how and how often slurry should be removed.

The choice most dairy farms are faced with is to either opt for some form of automated scraping system which can be programmed to travel up and down passageways at regular intervals, or to use a tractor equipped with a scraper unit to clean out when the cows are away being milked. There are, of course, also flushing systems but these tend to be the domain of green site dairy setups built specifically to accommodate them.

Clearly, it is important to keep central passageways as clean as possible if cows are to maintain the degree of cleanliness they deserve and most herdsmen would expect.

But there are more reasons for scraping slurry than to keep cows clean. According to Lucy Carling, a qualified vet and a member of the technical team working at the Somerset-based Kingshay dairy consultancy, ensuring cows’ hooves remain clean is instrumental in helping to reduce lameness caused by digital dermatitis.

“Digital dermatitis is a relatively simple bacterial infection to treat and control, but it is important to have an effective slurry scraping system which can keep cows’ hooves clean if the infection is not to recur or continue to spread throughout the herd,” she says.

“It follows then that whatever slurry scraping system is used it should be capable of maintaining a clean passageway where cows need to walk.”

There are basically two types of automated scraper – both use a scraper unit but one uses a chain or cable to pull it up and down the passageway and the other uses hydraulic rams to provide a form of ratchet drive to move the scraper along.

The key point to note with automated scrapers is that they need to be programmed to operate at intervals that will ensure slurry levels are always contained to acceptable levels. It may seem obvious, but the width of the scraper also needs to match that of the passageway so that there isn’t a pool of unscraped slurry for cows to step into as they reverse out of their cubicles.

Delaying the use of automated scrapers will also mean a higher volume of slurry has to be moved – a deep wave of slurry into which the cows are forced to step as the scraper moves towards them. This instantly nullifies all attempts there may have been to prevent the spread of digital dermatitis and there may also be contamination of the cubicles.

And the job isn’t finished when the scraper arrives at the slats at the end of the passageways. Almost inevitably, due to straw or solidified muck, there will be a build up of slurry over these slats which will then create a pool for cows to wade through. Ensuring slurry is able to flow freely through slats is time well spent.

Automation aside, there will be those who opt for a tractor and scraper – the yard tractor system. Needing fuel and an operator it could be argued that the running costs are higher than automated scraper systems, but against this must be set the greater versatility of a tractor and scraper which can also be used to clean collecting yards and other outside areas.

The tractor and scraper can also find favour because it poses no threat to cows which, with automatic systems, need to take avoiding action when scrapers approach them – although there are safety systems in place.

However, the extended scraping interval could be an issue for herds which only vacate their housing when its time to be milked. The question is whether or not twice or perhaps three times/day cleaning is sufficient to provide the required level of cleanliness.

Clearly, the number of cows and the length of passageway will have a bearing on this – it could be that a wider passageway provides a large enough area for twice/day scraping to be acceptable.

For: Programmable for required scraping interval

Use has been linked to increased levels of digital dermatitis

For: Can be used to clean other yards

Can only be used when cows are not in residence