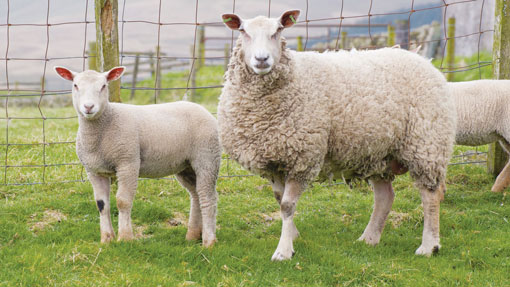 Nutrition, labour and health management of indoor and outdoor lambing systems is wide-ranging. Jeremy Hunt looks at how two producers are operating their systems.

Lancashire sheep producer Robert Towers lambed 90 ewes in four days at the beginning of December. They represent the first lambing section of his early indoor lambing flock – one that he reckons can incur less feed costs than running a conventional flock lambing outside in March.

He runs 175 pure-bred Charollais ewes at Camp House Farm, Farleton near Lancaster. Part of the flock is bred pure and the rest of the ewes are run with Beltex tups.

“We’ve changed the system for this year and have sold all our commercial ewes, and increased the pure-bred Charollais ewes to concentrate on early lambing inside. It’s hopefully going to help us cut down on feed costs,” says Mr Towers.

More than half the flock is put to Beltex tups to meet the growing demand for cross-bred terminal sires. The gimmer lambs will be finished, but there has already been interest in these females from other producers looking for continental-type flock replacements.

Last year’s good summer and autumn meant the ewes at Camp House Farm were in good condition in the final weeks before lambing.

So while concentrates are usually fed to ewes for about four weeks once they are housed prior to lambing time, this year they were only given supplementary feed for two weeks.

“Normally we house a month before lambing and start feeding ewes, but this year we only brought them inside in mid-November because there was so much grass. Feeding these ewes can be tricky because you want to give them enough, but not too much that will tip them over the edge when they are so fit.

“Scanning results showed quite a lot of triplets, so these ewes were given high-energy blocks before housing,” says Mr Towers.

Once housed for a week the ewes were taking up to 453g a day of an 18% concentrate. After lambing ewes can be fed up to 907g a head, but the key to the system is to feed the ewes just long enough to make sure they milk well, but then get the lambs on to creep.

“The aim is to feed the ewe and keep her milking, but then be able to cut feed back with confidence knowing the lambs have started to take enough creep feed, which we offer from about 12 days old.”

At lambing time ewes are allowed to lamb in their groups in straw pens, but ewes and lambs are then moved to individual pens where they stay for 48 hours.

“Health and cleanliness are high priorities of indoor lambing, so we do all we can to make sure new-born lambs get everything they need to protect them.

“We scratch lambs for orf and dose them with a coccisidiostat. We make sure all the pens are dry and inject all lambs as soon as they are born to prevent any risks of joint-ill.

“I know it’s young to treat them for coccidiosis, but we’ve had it in the past and so this gives them early cover just in case. Lambing inside is a good system and means the weather isn’t an issue, but you’ve got to be tip-top on health.

“All navels are sprayed and we give them protection against scouring. You’ve got to put up the best barrier you can against any bugs and be really on the ball by prevention rather than cure.”

Increased susceptibility to foot problems can be a problem for housed ewes at lambing time so the flock is vaccinated against foot-rot mid-pregnancy.

“Ewes and lambs are kept in pens for 48 hours and then turned into small groups of about five ewes before being “doubled up” to give about 12 to 15 ewes with lambs in each pen.

“But we don’t turn any ewes and lambs out to grass. You can put a lot of effort into getting everything lambed and going well and then run straight into problems and losses if the weather turns bad.”

Everything stays inside until weaning around late January to early February. Ewes are then turned out and lambs stay inside.

“Compared with an outdoor lambing flock, we probably use less concentrate – and particularly when we didn’t start feeding until the last two weeks of pregnancy. And even then ewes are only being fed for four weeks.

“After that, lambs are relying less on milk and more on creep. The aim is to feed the lamb and get the ewe off supplementary feed as soon as we can. Once the lambs are weaned the ewes are cheap to keep at grass.”

Mr Towers says keeping lambs alive is top priority. This season there were only 10 lamb deaths and all were stillbirths. The flock scanned at 194%.

A night-time lambing assistant is employed for the four days lambing time in early December. “It means we are fresh and ready to take over for the day-time shift and we know everything has been done correctly during the night.” 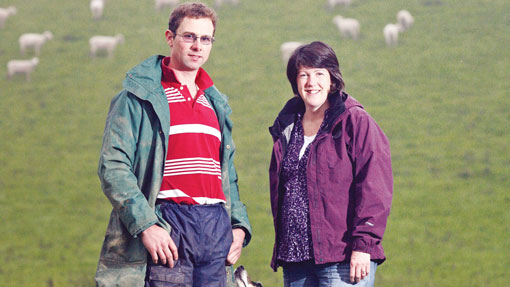 Phil Preece lambs 800 ewes outdoors, feeds no concentrate, achieves a scanning percentage of 185%, employs no additional labour at lambing time and has a full time job.

Lambing for Phil Preece and his wife Gill is simply “no big deal”.

“I look at the flock for an hour in the morning and an hour at night. The ewes just get on with the job and I probably only have five assisted lambings,” says Mr Preece, whose New Zealand Romney flock is run on 142ha on the Radnorshire-Shropshire border.

His business – Phil Preece Livestock Services – means he’s away from home a lot scanning sheep and then at shearing time. He’s “on hand” for the April lambing, but it’s as low input in labour as it is in feed.

“I reckon my costs a ewe are very low – about £6. That covers the fodder beet I feed in late winter and the cost of about eight weeks of winter grazing at 65p a week a ewe. We spend in total about £2,000 on fodder beet,” he says.

But one of the most important things Mr Preece says about lambing ewes outside is to have a breed that can look after itself and can get on with the job without needing too much attention.

Lambing starts on 1 April, with half the flock bred pure and the rest put to Oxford Down and Texel tups.

Ewes are sheared a week before tups are turned out and no concentrate is fed – even in late pregnancy.

Fodder beet is tipped on to the ground for ewes to take as they need it. They are run in groups of about 200 ewes.

“If the grass is late in coming we supplement with fodder beet, but once ewes have lambed and are on fresh ground no fodder beet is fed. And because we are running an extensive system we don’t have a risk of pasturella and so don’t inject for it.

“We give a jab to protect against clostridial diseases about a month before lambing and give a multi-vitamin bolus twice a year.

“We never touch ewes’ feet and don’t catch lambs or have any contact with them until they are docked,” he says.

Lambs receive no creep feed. Scanning is usually between 180% and 190% and lambs losses are about 15%.

“We shear all the ewes a month before tupping time. The Romney can get fat and ewes will get on their backs if they are carrying too much wool.

“So we take the wool off the ewes to make sure that doesn’t happen – and it also means they find shelter to have their lambs. Shearing is critical for outdoor-lambing Romney ewes.”

Mr Preece says these approaches to the management of breeding ewes may appear radical in comparison with typical UK sheep husbandry, but after spending time lambing ewes in New Zealand, he knows the Romney’s capabilities.

“Our aim when we came into farming was to run a flock of breeding ewes on a low-cost, low-labour system that would enable me to continue with my other sheep business.

“The New Zealand Romney is a breed that has been bred and developed specifically to suit this type of management, so it proves that there is potential to make big savings on costs of production – providing it’s applied to the right type of ewe.

“I have no concerns over mastitis – I might get two ewes all season if that. On an extensive system like this, disease isn’t an issue.”