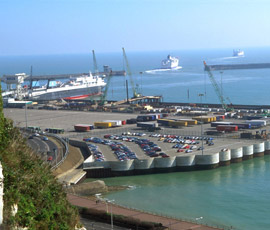 Live animal exports have returned to Dover port despite renewed protests calling for an end to the trade.

The converted Russian ex-tank transporter, which has the capacity of seven trucks, will make one shipment of live animals every week from Dover to Calais, lasting about three hours.

About 25 animal rights campaigners turned out to protest against the exports, brandishing placards saying “Greed over compassion” and “Cruel trade run by cruel people” and shouting “Shame on you” through loudspeakers.

Dover Conservative MP Charlie Elphicke wrote on Twitter: “This is a step backwards for animal welfare and the port.”

But the NFU welcomed the resumption of live animal exports through Dover.

“The MV Jolene will be sailing from Dover to Calais for a significantly shorter journey time, when compared with other ports, and this is a bonus for animal welfare. Ideally, we as an industry would like the ability to use the regular freight services from Dover which would mean a journey time of just an hour and a half and more frequent sailing.”

Regulations are in place at a UK and EU level to ensure that all animal transport, including that going overseas, is not detrimental to animal health, he added.

“It is not in the commercial interests of anyone in the livestock trade to transport animals in a way that results in sick, injured or stressed animals.”

Mr Langrish said the issue of animal transport “must be put into perspective” as there is demand from Europe for both UK breeding livestock and animals destined for the food chain.

“Large numbers of high-value breeding livestock are traded between EU member states every year,” he added. “Stock are moved to Europe, both for breeding purposes as well as for further rearing and eventual slaughter, in vehicles built to exactly the same standards.”

But Emma Slawinski, senior campaigns manager at Compassion in World Farming (CIWF), said the resumption of exports from Dover was a “dark day” for animal welfare.

She added: “Some would say it is better that the trade goes through Dover, as the crossing will be quicker, but the fact is anything that makes the trade easier for exporters can only drive up the number of animals exported, increasing suffering and perpetuating a trade that has no place in modern Britain.

“No matter what the journey, many exported calves will be raised in conditions that would be illegal under UK law and slaughter conditions for all animals could well be far, far worse than in the UK.

“The ex-tank carrier, the Joline, which is the only ship we know of taking live animals from Britain to the continent for slaughter, could be taking thousands of animals across the channel in the coming months.”

DEFRA, through its executive agency the Animal Health and Veterinary Laboratories Agency (AHVLA), is responsible for animal welfare checks on consignments.

In March, the RSPCA failed in its legal challenge to stop live animal exports from Ramsgate port. A High Court judge said the charity’s case was not even arguable.

Following an incident on the vessel at Ramsgate in September, more than 40 sheep considered by RSPCA officials as lame were put down.