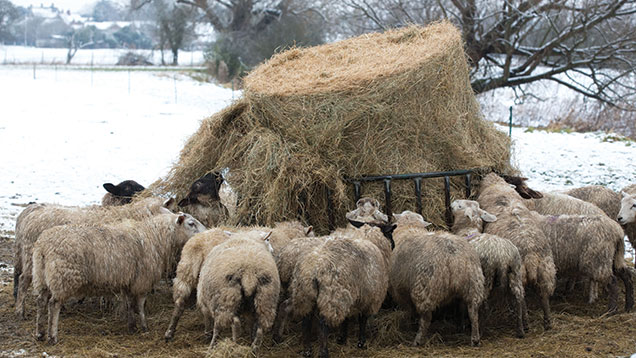 Finishing lambs for the early market can secure a premium price – but often at considerable expense. Olivia Cooper looks at the key considerations when finishing lambs early.

Producing lambs for the Easter or late spring market is often the holy grail for sheep producers, yielding premiums of about £30 a head over later finishers.

But finishing lambs early can prove both tricky and expensive, so it is essential to understand the true implications of such a system.

In recent years, lamb prices have risen sharply from February onwards, reaching a pre-Easter peak before dipping and recovering to peak again in mid-June.

But thereafter the drop was alarmingly rapid; losing 130.8p/kg in just six weeks, so producing for – and missing – the early market has serious consequences.

Paul Ashton, sheep auctioneer at Sedgemoor Market, Somerset, says it is still a bit early to predict where prices will be.

“Hoggs have been selling well, but I think there are still a lot to come through, which could affect lamb prices,” he says.

See also: Keep up to date with all the latest news from the auction ring

“The lamb crop was up by about 10% last year, and there have been about 5% fewer sold than normal, which means there’s another 15% to come to market at some point – unless prices fall to a level where producers decide to hold back ewe lambs for breeding.”

The benign winter could also encourage more people to aim for the early lamb market, he warns.

“If we get a lot of early lambs and hoggs together it could hinder prices.”

Export demand is another critical unknown.

“It can cost a fortune to finish lambs early. If you have the ability – and the weather – to finish at grass that will be the cheapest option.” Paul Ashton, Sedgemoor Market

“It’s been very up and down recently – exchange rates are a major factor,” says Mr Ashton.

“About a third of UK sheepmeat is exported, so the level of trade has a huge impact on domestic prices.”

With such uncertainty over prices, Mr Ashton recommends producers try to maximise production from forage and keep production costs down.

“It can cost a fortune to finish lambs early. If you have the ability – and the weather – to finish at grass that will be the cheapest option.”

Making the most from grass

Grassland consultant Charlie Morgan says the key to maximising production at grass is maintaining the sward height between 4cm and 6cm to boost grass quality and intake.

“If you’re planning to graze early, choose intermediate and late-heading diploids that yield early in the year,” he says.

“Graze it down to 3cm in December and give it a rest over the winter so it’s just right for turnout.”

Soil sampling and nutrient management throughout the year is vital, but producers should not apply spring nitrogen fertiliser until the soil temperature has been at 5C at a depth of 10cm for at least a week.

“Fertilise your south-facing fields first – don’t do everything in one go, so you can create a grazing platform coming ready when you need it.”

“If you have 12MJ ME grass most sheep will need about 2kg DM/day – daily intake is usually 3% of their bodyweight.”

Of course, many early lambing flocks will finish lambs indoors, in which case they will most likely be feeding round bale silage, he adds.

“With sheep and lambs you need the best-quality silage you can get, with a high legume content of red or white clover for protein.”

Sheep prefer a dry matter of 35-45% – too dry or unpalatable and they simply won’t eat enough of it.

“Get your silage analysed and use a nutritionist to calculate what you need in the form of concentrates,” says Mr Morgan.

“Although you want to maximise growth from forage, don’t be afraid to use creep feed to enhance growth rates on your singles – they respond faster than twins, so you can finish them earlier.”

Although oil costs have fallen this year, the benefits have yet to filter through entirely, and Mr Morgan reckons grass will cost about 5.7p/kg DM to grow this season.

Liz Genever, sheep scientist at Eblex, says producers should also focus on lamb health if they are aiming for rapid growth rates. “You need the lambs to keep growing throughout without any checks – and the biggest risk, especially if they are housed – is coccidiosis.”

Although coccidiostats can be included in feed, often these are only suitable for older lambs, and farmers must ensure feed intake is high enough to be effective. “There are other preventative options that you should discuss with your vet.”

Intestinal parasites are not usually problematic when lambs are housed, but if they are grazed farmers should carry out frequent faecal egg counts, adds Dr Genever.

“You also need to follow best practice with vaccinating ewes and lambs; lambs will need a bit of cover after they’ve lost the maternal immunity. Pulpy kidney is also a risk, so clostridial vaccines will be essential.”

Ewe health is also vitally important. “You should body-condition score regularly, and aim for as much milk production as possible,” says Dr Genever.

“You’re targeting lamb growth rates of 350-400g/day, which is a great drain on the ewe, so you must look after her.” Thin ewes are also at greater risk of mastitis, particularly in cold and windy weather.

Some producers introduce creep feed from day one, but the lambs won’t really start eating it until they are two to three-weeks-old. “You need to introduce it gradually; their diet shouldn’t be too starchy too early,” she adds.

“As they are getting a lot of milk they won’t need too much protein – creep feed is more about high-quality energy.”

With cereal prices running about 18% below last year, creep feeding should be more attractive this season. “Typically, 5–6kg of creep/lamb can improve growth to 14 weeks by 1kg liveweight,” says Dr Genever.

“This year, 10kg of creep feed will cost about £2.50 – equivalent to 24p/kg liveweight a lamb – so it’s important to do your own cost-benefit calculations, taking into account the extra growth rate.”

Rob Hole keeps 430 pedigree Poll Dorset ewes at Hill Street Farm, lambing 300-350 in September and the rest, along with ewe lambs, in December.

“We lamb indoors and turn the September batch out to grass after three or four days,” he says.

“The lambs get off to a flying start as the weather is usually good at that time of year.”

Mr Hole separates the September-lambing ewes into two groups a month before lambing, with those carrying twins getting high energy feed blocks for the final fortnight. Singles just get hay at night and grass during the day.

“We have 220 cattle, so lambing in September makes best use of the buildings and the grass,” he says.

“It’s very important to get the lambs off to a good start on milk, so a small amount of nitrogen fertiliser is applied at the end of August to boost grass growth and quality.

“The sheep then go on to forage rape/kale cross and dry silage from the third week in October until weaning just before Christmas.”

All the lambs have access to an 18% protein creep pellet from two or three weeks of age, with twins also fed 250g of lamb rolls a day.

“I don’t know why more people don’t lamb in September – the weather is much kinder than in the spring, and it’s good for the public to be able to buy new season lamb at this time of year.” Rob Hole

The December lambers are kept in a single group for ease of management and are housed over the winter. Ewes are fed just over 1kg of 18% protein rolls and ad-lib first cut silage, with lambs getting creep feed from two weeks old.

“They finish very quickly – some singles get to 42kg liveweight at 10 weeks old,” he adds. “We’ll wean them at 10-11 weeks to allow the ewes to rest before going back to the tup in April.”

Lambing percentages average 179% sold for the December group against 150% for the September group. “Tupping conditions are not as good in April as they are later in the year,” he explains.

Although Mr Hole can’t disclose his pricing agreement with Waitrose, it has been enough to double his flock size over the past 20 years, with the help of pedigree sales as well.

“It’s the 50th anniversary of our Sherborne flock – I work in partnership with my father and my eldest son helps three mornings a week, so we need a simple system,” he says. “I don’t know why more people don’t lamb in September – the weather is much kinder than in the spring, and it’s good for the public to be able to buy new season lamb at this time of year.”