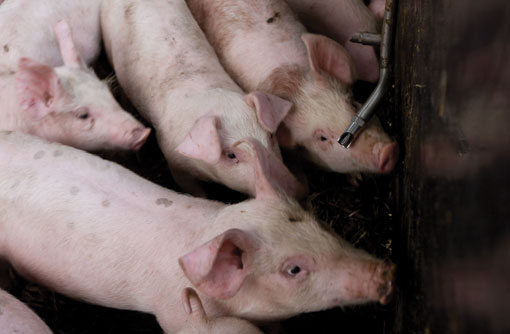 Led by FAI vet Ruth Clements, the report, which was launched in London last week, outlines the problems which can arise when housing entire male pigs in commercial units.

“In the EU it’s pretty commonplace to rear castrated pigs and at the moment it’s legal to do so without the use of anaesthetic, but in the UK it’s commonplace not to castrate pigs and to rear entire males,” said Ms Clements.

“It’s fair to say in our commercial systems we tend to put our pigs in fairly challenging situations in terms of social proximity with other pigs. And things which aggravate the issue include lack of enrichment and competition for resources such as feed and water – for entire males it may be more problematic for them to deal with.”

She said normal pig behaviour was based around an inherent social and hierarchical order, established from an early age at suckling when the more dominant pigs get access to the more milky teats on the sow.

“We want to give the animals improvements in welfare at both ends of their lives, and I would like to think there are a range of solutions for producers.”
Ruth Clements, FAI vet

And once male pigs – which in a natural environment are relatively solitary creatures – reach puberty at between 7-9 months old, there is an increase in hormones which stimulate aggressive and sexual behaviour.

As a result there is an increase in mounting which results in skin lesions, bruising and leg problems, and in some units, where gilts and boars are housed together, gilt stress and unintended pregnancies can occur.

“Aggressive behaviour is a normal part of any pig’s behaviour; you get a certain amount of argy bargy in any pig pen. But when you keep pigs in large groups it’s difficult for pigs to establish a hierarchy and problems come when you are mixing groups of pigs,” added Ms Clements.

She said the increase in these behaviours in entire male pigs resulted in reduced eating and resting time, thus impacting on efficiency in the system. And in economic terms, this resulted in entire males not achieving their growth rate potential.

Ms Clements added: “We are trying to allow producers to benefit from rearing entire male pigs and to allow them to capitalise on the capability of the animals.

“We want to give the animals improvements in welfare at both ends of their lives, and I would like to think there are a range of solutions for producers.”

She said the use of the Improvac vaccine, which is approved under the RSPCA Freedom Foods welfare standards, at the end of the rearing period could reduce levels of aggression and sexual behaviour in these pigs.

The vaccine, which costs approximately £3 a pig to administer, works by producing a temporary immunological suppression of testicular function. Benefits include a reduction in sexual and aggressive behaviour, and improved meat eating quality through an elimination of the risk of boar taint.