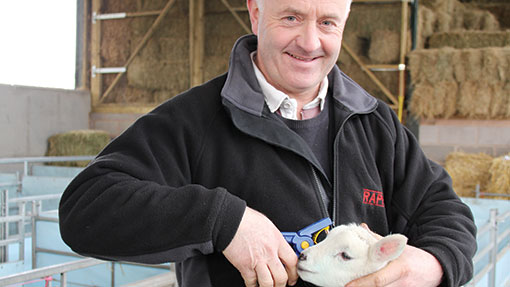 In less than six months time EID will become compulsory on UK sheep farms. Rhian Price speaks to one farmer who is already using EID and finds out what benefits it can bring.

Under new government rules, all lambs tagged from 1 January next year will require electronic identification. While this will be challenging for many, particularly upland sheep farmers, those willing to embrace the change fully could reap huge benefits.

This is the belief of Worcestershire sheep breeder Marcus Bullock, who has been using EID as a recording tool within his flock of 750 performance-recorded Lleyn ewes for the past 15 years.

“There are a lot of negatives about EID out there and farmers are reluctant to embrace it because they’ve had it thrust on them and feel it is in their interest not to make it work.

“But actually there are a lot of positives [to EID]. It will make stock movements considerably easier and it will remove that element of human error.”

Although, he concedes upland sheep farmers will be hardest hit by the new measures.

“I do have a measure of sympathy for upland flocks where the impracticalities of EID will probably outweigh the benefits, because of how few times they gather sheep and handle them.”

Mr Bullock says it is foolish to suggest it will help improve traceability of hill sheep, when so many are lost each year.

However, he believes many lowland flocks could recoup the additional 70p spent on electronic tags by looking at their management in more detail.

“By doing basic recording, farmers could make huge improvements within 12 months, simply by culling the bottom 10% [of worst performers] from their flock.”

It is this “bottom up” approach to breeding that has sped up genetic gain across his whole flock. Investing in EID has been integral in helping to achieve this.

The entire flock is recorded from birth and stock performance is recorded throughout the animal’s lifetime in the flock.

The nucleus flock of 300 ewes are AI’d to the flock’s top maternal sires and are lambed in two groups of 150, with the first starting in February and the second group at the end of March.

“Using AI allows us to use our very best rams across a higher number of animals.

“AI is massively underrated in this country. The rate of genetic progress is so much quicker using proven genetics.

“We have a shortlist of 175 ewes [for each group] and we will go through their performance figures and see where their strengths and weaknesses are.”

In fact, it is a considerable feat if ewes qualify for this group. By his own admission, Mr Bullock has a “ruthless” approach when it comes to selecting breeding ewes.

“Our system is a simple, forage-based system, so we’re putting our ewes under a lot of selection pressure from day one and if they don’t tick that box they are down the road.

“It is pretty ruthless, but it is the only way you make progress.”

The remainder of the ewe flock, and up to 300 ewe lambs are lambed in April, following natural service.

“On the ewe lambs we tend to use rams which we know exhibit easy lambing characteristics.

“Lambing ewe lambs gives us the advantage that we can identify proven stock 12 months earlier,” he adds.

Ewe lambs have to be 36kg or heavier to be considered for tupping. They are run with teaser rams for five weeks – or two cycles – before a ram is introduced for three-and-a-half weeks. And to ensure tupping weight is achieved they are shorn in August at, or shortly after weaning.

“Anything that isn’t precocious or a natural breeder gets culled.”

Ewes and ewe lambs that are not suitable for breeding are recorded on the EID database as a cull management group.

“When they are run through the crate before tupping it flags it up that she needs to be drafted from the group.”

This diligent breeding protocol is achieving a conception rate of 95% in the ewe lamb group.

Mr Bullock’s scanning target for ewe lambs is 110%, but in reality they are running slightly higher than this at 120-125%.

At scanning, results are recorded and all females are run back through the Farm iT 3000 weigh crate which drafts them into three management groups, depending on litter size.

Singles: Receive no concentrate to prevent lambs from becoming too big

The Bullock family adopted an anti “Kiwi triplet policy” from the outset and as a result scanning target for mature ewes is around 185%.

“Our records show that as soon as you go above this you increase triplets, not twins.

“It is a little bit controversial, because most geneticists will tell you litter size isn’t a very heritable trait, because management can have more of an influence. But I think you need to do both.

“Our triplet rates now in our mature ewes would be below 7.5%.

To help control prolificacy, ewe lambs that were born as a triplet are unlikely to make the nucleus flock.

“Triplet lambs are more often than not the ones that fail to achieve tupping weight.

“We sell on average 80-100 yearling rams a year and the majority go to commercial, outdoor, lambing flocks and they don’t want triplets, because they’re difficult to manage.

All AI ewes are lambed indoors, along with singles and triplets so they can be fostered easily, while later-lambing twins lamb outdoors.

As all rams sold go on to produce replacement females maternal attributes are paramount and at lambing, traits such as mothering ability and lambing ease are recorded on handheld readers, using a three-point scale of +1 to -1.

“We don’t want to have to catch a ewe and strip colostrum out of her. We want ewes with nice, compact teats that are easy to suckle, with good udder suspension – not udders swaying around their hocks.”

Anything below average for these traits is recorded via individual EID into a cull group and won’t be bred again.

“At times like lambing EID is a blessing in disguise because if we were still using paper recording we would struggle to keep up,” says Mr Bullock.

All routine flock treatments are recorded as batch treatments using EID and handheld readers are used to document individual treatments such as antibiotic use to treat mastitis cases.

“We routinely treat for clostridial disease four to six weeks before lambing and lambs are dosed at four and eight weeks of age.

“The only other routine treatment is pour-on. Lambs are usually treated in the first couple of weeks of May to give 16 weeks cover until August, when we shear.

“We meet with our vet twice a year to discuss our health plan and because of that we are using antibiotics more strategically.

“EID has been useful in making recording and administration more accurate.

“We drench as we see necessary and use FEC (faecal egg counts) to monitor worm levels,” explains Mr Bullock.

In fact, in the last 10 years worm resistance has become an increasingly important objective within the flock’s breed programme.

Mob faecal egg counts are conducted on lamb groups and if this goes above 500 eggs/g they will consider individually testing animals within that group.

Results are recorded on the EID database and are then sent to Signet where they’re used to calculate sire’s estimated faecal egg count EBV.

“Our goal is to produce worm resistant sheep and my long-term target is a single drench for life (within the first 12 months).

Weighing plays a vital role in conjunction with FEC monitoring.

“If weight gains tail off, it acts as a precursor for mob egg counts,” explains Mr Bullock.

As a result lambs are weighed every four weeks up to 20 weeks of age, which is when Mr Bullock conducts individual FECs and scans for back fat and muscle depth.

Meanwhile mature ewe weights are recorded four times a year: at weaning, tupping, scanning and lambing, in an attempt to identify the most efficient ewes.

“We are trying to identify animals that have the genetic ability to mobilise their body reserves, as a prerequisite for each stage of the production cycle.

“We are looking for a ewe that is able to work really hard during lactation, but has the ability to recover and get back in condition ready for tupping.”

“Experience shows that ewes can lose up to 1.5 points [BCS], but if they have that ability to recover that condition in 10 weeks (between weaning and tupping) that is the sheep we want to identify and breed rams from.”

It is work we are doing hand in hand with resistance, because we have this notion that sheep that are able to do this have a degree of parasite resistance.

In the last three year’s the whole flock indices for FEC has crept up from the top 25% and now sits in the top 10% alongside maternal traits.

“It is not about identifying individual stars. It is all about raising the performance of the entire flock from the bottom up.

“EID hasn’t directly improved these traits but indirectly it has improved the accuracy of that data and eliminated human error.”