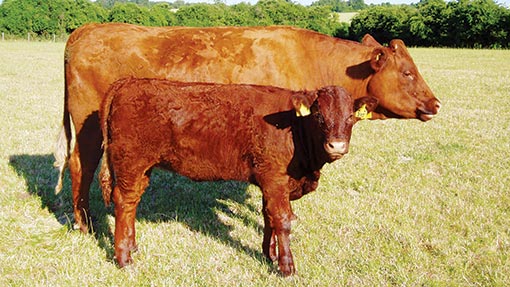 A move away from Aberdeen Angus to Red Ruby Devon has seen suckler producer Tom Hooper increase outputs by rearing more animals a hectare in the summer and feeding less during winter.

According to Mr Hooper, Red Rubys are no longer the “short, dumpy animal” of old. He believes he’s on to a winner, as his pedigree herd aren’t simply competing with the Angus; they’re outperforming them in their ability to efficiently convert all types of forage into meat at the family farm in Ebbesbourne Wake, Wiltshire.

“The breed is improving in terms of its commercial viability. They weigh well, kill out well [55% +] and their eating quality is excellent,” says Mr Hooper, who puts these qualities down to a slower growth rate. “The Angus finishes quicker [18-22 months], but it costs more to get them there. You don’t need to push the Devons, they’ll finish well on grass with minimal cake [20-24 months],” he adds.

He now has 60 Red Ruby Devons and a mix of 30 pure- and cross-bred Angus. He switched focus to the Red Rubys after performance records showed he could run about 1.4 Red Ruby cows and calves a hectare compared with 1.1 Angus. This data, coupled with Red Ruby weaning weights, which are 10kg heavier than the Angus during the same period of time and on less feed, could not be ignored, he says.

“I’m leaning more towards Devons as they suit my grazing system. They hold their body condition, milk better and their conversion of grass to meat is very good. The maternal traits are better than an Angus, their temperament is docile, but they’re very stubborn,” says Mr Hooper.

Producing as good a quality pasture for his cows as possible without spending excessive amounts on fertiliser is extremely important to Mr Hooper.

However, his pasture varies from Site of Special Scientific Interest (SSSI) land to good, permanent pasture with ryegrass and clover and he is in a nitrate-vulnerable zone.

The adaptability of the breed to do well on good or poor pasture is clearly an advantage. Mr Hooper believes the diversity of the breed contributes to this, as smaller cows are more suited to extreme conditions, whereas bigger animals do better on good pasture.

Having a wide age range of breeding animals – and therefore sizes – in the herd allows Mr Hooper to pick and choose which ones will do better on which pasture.

“The more traditional ones go on to poorer pasture that is often steep and high, the more modern type have a bigger frame and I put these on to lower, more level, ground with better grass,” he says.

Even in the extreme weather conditions of the past two years, with very poor grass growth, the Red Rubys have continued to work, producing milk until weaning and the bulls have still performed with a 99% conception rate.

The trend of more profitable production from the Red Rubys at grass is one that also continues through the winter housing period.

“The Angus cows eat 30% more silage than the Devon cows over winter. The Devons reach their target weight of 500kg by about 18 months when I move them on to a designated finishing unit, which is important so I don’t have to take them through a second winter,” says Mr Hooper.

Performance recording has supported Mr Hooper’s drive to continually improve the breed. He says it gives reassurance and clarification in terms of what your eye is telling you. A recent surge in genetic improvement has led to a more modern commercially viable type of Red Ruby with a smaller rump, but longer carcass to satisfy the increasing demand for fillet.

“EBVs are a useful tool to help myself and others gather information on different bloodlines and genetics. With more information in front of you, breeding decisions are made easier.”

Mr Hooper has recorded just about everything, from ease of calving to milkiness in the dams and daily liveweight gain to conformation for the finishers, but he believes more people need to do the same.

“The bigger the herd, the better the genetic profile. Currently there is a very small Devon gene pool, but if more people share their data we can work together towards the same goal. EBVs need to be more accurate – there’s not enough information on the Devons yet, so current figures don’t give a true reflection of how good the breed actually is.”

Calving ease, 600-day weights and milk values of the dam are some of the most important EBVs Mr Hooper looks at.

One area he has seen continued improvement is fertility. The Red Ruby Devon bull got 35 cows in calf in four weeks compared with the Angus with 26 cows in six weeks. Mr Hooper puts the tighter calving pattern in the Red Rubys partly down to cow management, but he also believes the Angus cows can’t cope with the conditions, so are slipping or can’t hold.

“Devon bulls are as easy calving as the Angus, they come out like whippets and grow like bricks, but it’s all relative to what [bull and cow] you’re using,” says Mr Hooper.

Both the added value supermarket and CHeCS higher health scheme allow Mr Hooper to receive a premium of £2/kg liveweight on his Red Ruby Devon-sired steers sold as stores. However, he has also started to filter off a small percentage of these for local restaurant supply, where he achieves about £2.25/kg. Ideally he would like to expand local food supply to about 30% of meat sales.

“My future business focus is all about improving genetics within the Devons and producing pedigree animals for breeding. I want to use pedigree Devons as a commercial herd, so I’m looking for about 60% income from pedigree sales and 40% from meat sales,” says Mr Hooper.

“The Angus are a means to an end. The Devons have more potential, I can do more with them and I have more of a buzz about the breed,” he adds.

Mr Hooper’s advice to farmers who are struggling with native breed productivity is to refine what they’re doing and manage the whole environment.

“Produce as much information on an annual basis as you can and make sure animals are getting enough, but not too much food,” he says.

Mr Hooper has not been afraid to try new things. He says while he’s not prepared to lose money in the process, he is prepared to think outside the box and feels others should do the same.