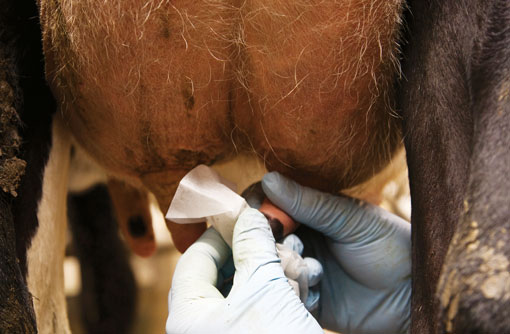 Reducing infection risk at the start and end of the dry period is crucial to curtail mastitis problems in early lactation.

The dry period was shown to be the most important period for mastitis control in 45% of herds taking part in the DairyCo Mastitis Control Plan.

Further additional research has also demonstrated that on some farms up to 75% of mastitis may originate in the dry period.

It is likely that any mastitis infection seen in the first 30 days of calving was picked up when cows were dry. Because the start and end of the dry period pose particular risk for cows picking up new mastitis infections, it is crucial to pay attention during these critical times.

Vet Den Leonard, of Lambert Leonard and May, believes it is essential that the drying off procedure is done meticulously.

“Mastitis is a human made disease – it’s not herd dependent, but human dependent. You need to manage the environment at drying off, have a good procedure, use the right product and ensure milk production is reducing,” he says.

To minimise the risk of infection being introduced at the start of the dry period, the first priority should be to ensure drying off is carried out as a specific event and not at the same time as milking.

“You need to ensure all teats are cleaned and dried well, and the person doing it is wearing a fresh pair of clean gloves.”

Mr Leonard advises using fresh cotton wool soaked in warm water and a disinfectant that will clean and soften the teats. It’s also important not to wash the whole udder so as to avoid drawing contamination down to the teat ends.

Teats should then be dried thoroughly with a fresh paper towel. Ready-prepared teat wipes or fresh cotton wool should then be used to apply surgical spirit to the teat ends.

When teats are clean and dry, the antibiotic dry cow tube and/or teat sealant should be inserted. Mr Leonard urges producers to talk to their vet to discuss the best dry cow therapy for their farm.

In some cases it may be appropriate to consider just using a teat sealant on carefully selected cows of low mastitis risk. This not only promotes responsible antibiotic use, but could also save money by ensuring antibiotic is only used where necessary.

However, Mr Leonard urges extreme caution in going down this route and advises only to do so after talking to a vet. “If you’re just going to use a sealant, cleanliness has to be exceptional. If it’s not, you can seal in a problem. I’ve commonly seen cases where this has resulted in sudden death of a cow.”

Nonetheless, he believes teat sealants should be used on all systems, in conjunction with antibiotics where advised. “Within the practice we have evidence that using Orbeseal at drying off reduces mastitis within the first 100 days of calving by one-third to a half.

“But the most dramatic effect I have seen on reducing mastitis has been using the mastitis vaccine,” he says.

The vaccine can be used in different ways depending on the farm, but could help reduce mastitis infection originating in the dry period.

“The vaccine can sound expensive, but if you can reduce mastitis by 10 cases a 100 cows/year, you can get into a profitable situation. I’ve seen a reduction in 50-60 cases a 100 cows on some farms.” However, it only works when tackling other areas on farm.

Vet Lucy Gill of Friars Moor Veterinary Clinic, explains how the two weeks prior to calving can be particularly risky for mastitis infection as teat sphincters start to open up.

“It’s important to look at housing or outside environment. In housing, look for areas where bedding is damp and assess if ventilation or drainage is sufficient,” she says. “If ventilation is poor, the water produced through respiration cannot escape, creating humidity and a perfect environment for mastitis pathogens,” she says.

When stock is outside, pasture should be rotated to avoid build up of Strep uberis. “Rotate between paddocks every three weeks and don’t return to a paddock within four weeks,” advises Ms Gill.

Calving boxes should also be cleaned between cows, fresh cows milked within 12 hours of calving and the calf removed within 24 hours.

“Nutrition is also crucial so as to avoid sub-clinical and clinical milk fevers which can reduce the cow’s immunity and make her more prone to mastitis,” she says.