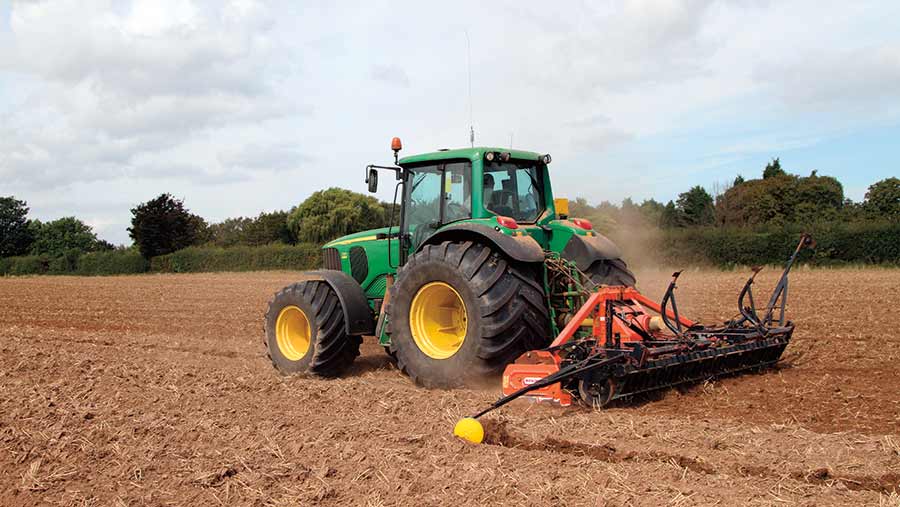 Farmers planting new grass leys this autumn have almost no chemical control options for common insect pests after products containing the active chlorpyrifos were restricted in grassland on 1 April this year.

This puts increased importance on non-chemical practices for growers to consider ahead of establishing swards, with cultivations, rotational changes and variety choice all important, say consultants.

What are the frit fly risk factors?

The biggest initial threat to autumn reseeds is a third generation of frit fly, with adults laying their eggs in emerging leys through late August and early September.

Populations in a square metre can exceed seedling numbers and completely decimate a crop.

Risk is intensified where establishing after grass or in areas where grass is widely grown. Italian ryegrass is most susceptible to attack, followed by perennial ryegrass.

Pyrethroid insecticides esfenvalerate and cypermethrin are approved in grassland and can be used at emergence to target adults where frit fly risk is high, but success can be limited.

The textbook cultural approach to reduce damage is leaving a 10-week gap before establishment after grass, or reseed in the spring so plants are well established before the first generation is active.

However, Cheshire-based AICC agronomist Paul Sweeney believes these two methods are impractical for many, who approach spring sowing with reluctance because they lose valuable early spring production.

He advises farmers going ahead with autumn seeding to ensure a good kill of the “green bridge” – whether destroying a ley or cleaning out weedy stubbles – by using a good dose of glyphosate.

Mr Sweeney prefers ploughing close to reseeding rather than ploughing early and says seed-bed quality is critical, because like all insect pests, frit fly larvae prefer open and fluffy soils for ease of movement.

“Aim for a fine seed-bed and [once seed is sown] rolling is essential to firm things up,” he adds.

“If using cambridge rolls, you should use them twice, but a ballast roller might be better. You need to be wary of compaction, but if you get it done early and when soil conditions are dry, it shouldn’t be a problem.”

Hutchinsons adviser Philip Styles – who covers Bedfordshire and Buckinghamshire – adds where damage begins to appear, further rolling of the ley should be encouraged to limit the movement of larvae.

“It is also worth considering higher seed rates to counter any losses, or using a higher proportion of more resistant grasses such as fescue in the seed mix,” he says.

While frit fly offers the greatest threat to newly-sown autumn grass, leatherjackets – larvae of the crane fly – can also result in significant damage.

Adults are active through late August and early September, laying eggs in cereal crops and established grass, which hatch and feed through the winter months when temperatures are above 0.5C.

Early sowing ahead of egg laying can help reduce the risk of damage in new leys, while sowing towards the end of September should also be avoided.

What are the leatherjacket risk factors?

Ploughing out old leys early and vigorous cultivation of seed-beds will increase predation and cause physical damage to reduce numbers.

It will also help if wireworm is present when replacing a longer-term sward.

Where there is an issue with moisture loss after earlier cultivation and clover is in the mix, grass can be sown later once moisture arrives, with clover then oversown in the spring, says Mr Styles.

“Farmers may also want to consider moving to longer five- to six-year leys in the future so they have to run the risk of establishing grass less frequently.”

Seeking solutions from the organic sector 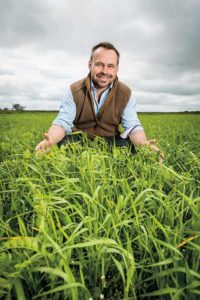 Northumberland-based Simon Bainbridge runs a 650ha organic enterprise consisting of 150 suckler cows and 1,500 breeding ewes. He has been using a break crop between leys for a number of seasons.

When re-establishing underperforming swards, rather than going straight in with an autumn reseed after grass, he ploughs and establishes a winter-hardy rape-kale hybrid, providing a break and some high-value winter fodder.

Mr Bainbridge ploughs in April and drills an oat and vetch mix undersown with clover and high-sugar grasses.

He says when using this system he has no pest problems whatsoever, despite being unable to use an insecticide.

This rotation successfully disrupts the lifecycle of insects such as frit fly and leatherjackets, reducing the pressure on the spring-established swards.

“In the future, rotations across the country will need to be lengthened to reduce not only pests, but also weeds and to improve fertility,” says Mr Bainbridge.

Experimenting last year, he used 4-5kg/ha of oilseed rape in the mix to attract the insects while the grass was emerging and found it successful.

“Before the rape plants get too strong and competitive, you can take them out with herbicide,” he adds.