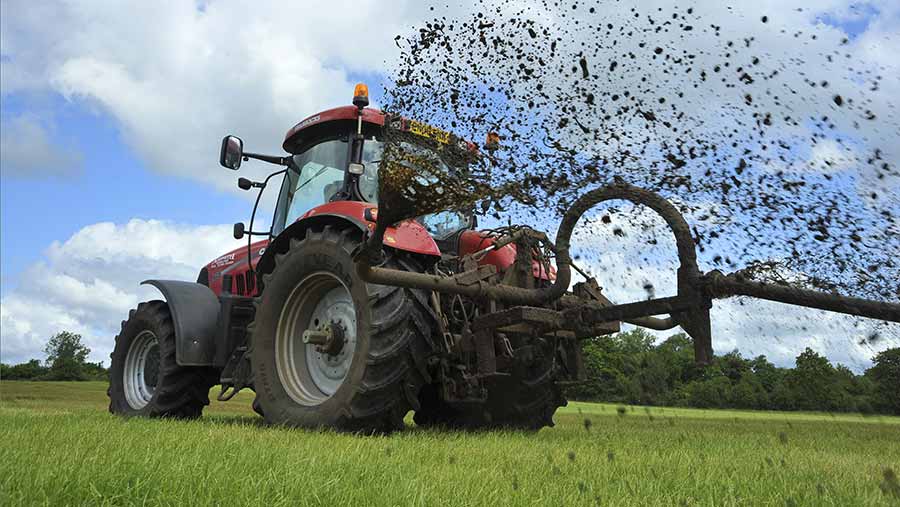 Farmers can reduce the risk of run-off and soil damage during slurry spreading by limiting the use of heavy machinery.

Unprecedented rainfall in November, December and January has hindered both the storage and spreading of slurry. If spread in very wet conditions, nutrients found in slurry can be lost and run-off can cause water pollution.

“The ground is wet, the machinery is heavy – it’s a recipe for a lot of soil damage,” he says.

“Compacted soil is not going to absorb slurry. Extra rain could carry that slurry into streams and ditches.”

“It sounds like common sense, but walking the fields is always useful,” he says. “We often judge fields by the gateways and the bits we can see, but a good walk around is important. Having done that, we can look at the minimum spreading required.”

If spreading is deemed necessary, Mr Morgan suggests using either a low-rate irrigator or an umbilical slurry spreading system.

He said these options will allow farmers to dewater their slurry storage, while limiting the effect of machinery on the ground.

Tyre choice and pressure also have “a role to play.” Farmers can increase the surface area of the tyres on their tractors and tankers – thus reducing ground impact – by lowering tyre pressure and opting for flotation tyres, he says.

“Another option is the use of other slurry stores,” Mr Morgan says. “There may well be storage on farms not being used that can be put into service.”

“At the end of the day, slurry going out on wet ground that is at risk of run-off is bad news,” he says.

“All of these options are secondary. If you can avoid spreading on wet ground, that’s preferable.”

“If you have neighbouring farmers, make enquiries to see if they have capacity, but there is going to be a high chance they are at full capacity as well,” he says.

“With an earth-banked slurry lagoon there is the possibility it could be extended, but that is also difficult if it is already full. Also those things tend to need approval from the Environment Agency,” Mr Ball adds.

Another option farmers could explore is anaerobic digestion, he says.

“Even if there are anaerobic digestion plants in the vicinity, they could put that through their system. There again could be all sorts of regulations, but it’s another area to be explored.”

He adds that by putting slurry through a separator, which farmers may be able to source on an emergency basis, they can reduce volumes by 15-20%.