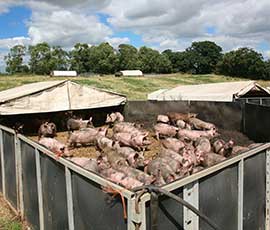 More than half-a-million pounds are being invested in research looking at pig aggression and ways to reduce it.

Scotland’s Rural College will invest £580,000 to look at the way the animals fight and specifically on how they settle contests on first meeting.

Simon Turner, SRUC senior researcher and leader of the project, said previous attempts to minimise aggression at mixing such as adding straw, mixing the animals at night and tranquillising them, had not worked long term.

The researchers believe if they can work out how the pigs think, they could help pigs to form their natural hierarchies in as painless a way as possible, making them far calmer during mixing.

“We know little about how pigs make decisions on who to fight and when to give up, but this knowledge will probably prove to be essential in designing management systems that are effective in reducing the welfare and economic costs of aggression,” said Mr Turner.

Areas of investigation include mixing pigs at a younger age to see if this reduces their aggression when mixed later in life. In separate work, the researchers will explore the role pig genetics plays in levels of aggression and whether selective breeding could help address the issue.

Mr Turner added: “At the end of these projects we hope to be able to offer better advice on how to manage and breed pigs in ways that will help the animals make the best decisions for their own welfare, and so reduce aggression.”

Keep up to date with the latest pig news