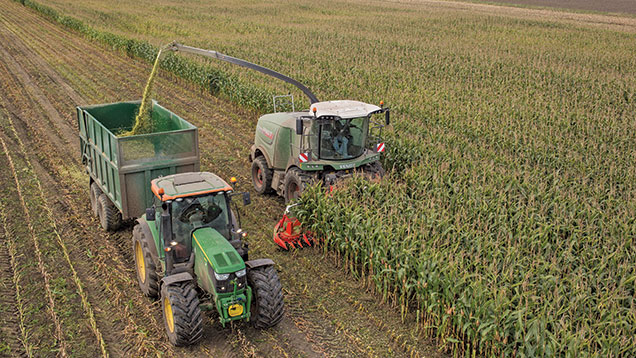 Oversowing with grass and harvesting a month earlier are two ways that livestock farmers can cut the risk of soil erosion in maize stubble.

Managing soil is back in the spotlight as Defra’s new soil protection standards came into force earlier this week. They replace the soil protection reviews for cross compliance.

For maize growers, the key issue has always been how to manage land after harvest. Last year’s wet winter highlighted the risk, with one Adas trial seeing losses of 1.3t/ha (see panel) from one plot with a slope of just 3deg.

There are several practical ways of reducing erosion risk and the Defra guidance advises ploughing stubbles after harvest if compaction has resulted from cutting. But this may prove tricky if the weather turns, warned MGA agronomist Simon Draper.

Speaking at the recent MGA workshop, in Somerset, he outlined two other approaches. The first is to harvest earlier in September instead of October, when conditions are more favourable with a lower risk of compaction.

It states that soil erosion over a single area greater than 1ha, or caused by livestock trampling along a continuous stretch of more than 20m long and 2m wide of a watercourse will lead to non compliance.

Other tips when outwintering livestock include where possible:

And if compaction does occur, conditions are still good enough to plough up the compaction to encourage infiltration.

“For high-risk fields, consider harvesting early in September rather than October. You can expect trouble if you continue with late harvesting.”

John Morgan of Creedy Associates believes growing under plastic and opting for an earlier maturing variety could help alleviate the impact of harvesting earlier on yields.

He pointed to Irish trials which saw crops reach maturity earlier. “The extra yield (3t/ha DM) helps to cover the extra cost and the quality is also higher with a 6-10% higher starch and energy content.”

To help UK growers, the MGA for the first time in 2014 funded variety trials under plastic to generate UK data. “We have seen some real differences between varieties in performance under plastic.”

The second option is oversowing with grass, to produce a green cover crop over the winter.

Mr Draper points to one trial looking at run-off from plots. Uncultivated stubble saw 228 litres of run-off compared with one litre for the area that was chisel ploughed after harvest and 53 litres for oversown grass.

“Use the cheapest grass seed and broadcast at half the rate you would when establishing a grass ley at the six- to eight-leaf stage.”

The grass grows slowly under the maize canopy and once harvested, the grass greens up and rooting helps to hold the soil, he explained.

The MGA conference on 26 February near Peterborough will also look at reducing soil nutrient loss. More details at www.maizegrowersassociation.co.uk

The three-year trial which ended in 2014 looked at different establishment techniques at two sites, one in Norfolk and the other in Devon.

Adas soil specialist John Williams said that soil losses in 2012-13 were 1,300kg/ha for the uncultivated stubbles in Norfolk. Losses were lower in Devon as the soil was less susceptible to soil loss.

“It was an exceptionally wet year and we saw big differences between treatments on a 3% slope [gentle slope]. It was a worst case scenario and last season was much more favourable.”