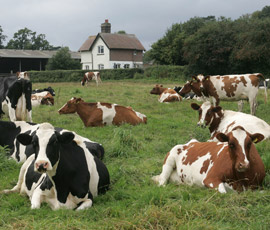 Scientists in Australia have developed a robotic cattle herder, which they claim is better at herding cows than humans or dogs.

Researchers at the University of Sydney tested the four-wheel robot, named Rover, to round up cows and move them from a field to a dairy.

They said the $1m (£490,000) prototype, which was adapted from monitoring fruit orchards on farm, was able to move the cows in a calm and effective manner.

A team of researchers from the university’s Centre for Field Robotics, operated the unmanned ground vehicle by remote control to successfully herd groups of 20 to 150 cows.

Dairy researcher Kendra Kerrisk, of the university’s Dairy Science Group, said the robot moved cows at their own speed, which could help reduce the risk of lameness to animals.

“The research is in its very early stages but robotic technologies certainly have the potential to transform dairy farming,” Dr Kerrisk told the BBC.

Currently, the robot needs to be operated by a human but it is hoped a new, fully automated version can be developed in the future.

Researchers said future work would focus on the development of a fully autonomous herding system.

They hope the robot will also be able to gather data to test soil quality, check water troughs and detect damage to fences.

Manual herding practices are responsible for a number of deaths in Australia and the UK each year. However, researchers say the use of robots could reduce fatalities caused by rounding up and sorting cows.