There are three options for pig producers: Improve health and genetics change production system or restock. But for JSR, restocking is the strategy that pays.

Reinvestment in new breeding stock is often hard to contemplate when pig profits have been all but eroded by soaring cereal prices. But better health – and the positive impact on feed efficiency – could be the pathway back to profitability.

It didn’t take pig breeder JSR Genetics long to highlight producers’ options to counter soaring feed costs in a bid to salvage pig profits. The company knows the sector is still healing from the losses incurred in the 1990s, when sale prices plundered producers’ pockets.

And now it’s the cost of feed that’s at fault. Forecasts for cereal futures suggest demand for grain will maintain pressure on prices for the short-term future (next six months) at the very least. With BPEX suggesting many producers are losing £12.50/finished pig as a consequence, losses to the UK industry could be colossal.

But there are strategies that can at least ameliorate some of the assault from high feed costs, explains Carlos Peralta, JSR Genetics’ commercial director. “As far as economics are concerned, the health of a pig herd is the single most important aspect to control.

“Most infectious diseases depress both feed conversion efficiency and daily live weight gain together with increases in mortality and cost of disease control.”

The UK pig sector is currently experiencing a wave of disease pressure, not least in the form of PRRS, ileitis and EP. Some producers will continue to live with poor health and poor production for two reasons: Either they lack the knowledge of what options are available to them or feel an alternative strategy, such as a de-population, wash-out and restock to improve herd health, is too costly.

The crux of the matter and any basis for a decision whether to restock is this: As herd health improves so does growth rate and feed efficiency, both helping reduce production costs.

But not all options to tackle herd health will deliver the same results over a period of time, he explains. Partially repopulated units may show initial improvement in performance, but by year three may well have relapsed to a low health status.

There are three basic choices for producers. First, improving the current situation using vaccination, moving to all-in/all-out groups and introducing new genetics can be expensive and on-going.

Second, changes to production systems can be made such as moving to three-week batch weaning and medicated early weaning. This carries few, if any, long-term guarantees and can also be capital intensive.

Third, a herd restock. This is more complex in some aspects of timetabling, for example knowing when to stop serving sows (See table one), and the need to have access to off-site facilities when starting the new breeding cycle. “The only situation where a restock would not have all the benefits is where the unit in question is within 1.5 miles of another with low health status.

“In this scenario there is a higher risk of re-infection and producers would be advised to ensure new breeding females are vaccinated to protect against local disease challenges,” explains Dr Peralta.

Those units opting for a restock can expect to incur a gap in the production system of four to eightweeks typically but, due to restock improvements, the income gap is virtually non-existent. As well as limiting some exposure to high feed prices, it also allows time to modify a unit’s infrastructure and delivers long-term benefits from the word go, he adds.

To illustrate the depopulation option, JSR teamed up with Garth Vet Group to compile statistics. This resulted in the formulation of a cash flow projection for producers looking to improve herd health to counter the impact of rising ration costs (see below). 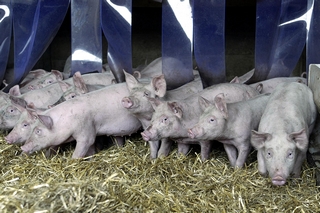 “Other considerations include the ability to reduce mortality by 60-65% and drug use by 70-90% at the same time introducing a more efficient sire line,” adds Dr Peralta.

Is it sufficient to convince producers? “It’s a question of attitude,” he says. “Do you invest when margins are tight so when the market recovers you can exploit a competitive advantage from having an efficient herd? Or do you simply sit tight, do nothing and hope to ride it out?”

For JSR the latter is never an option. High health breeding units are routinely restocked every seven- to 10-years to address declining health status and ensure the latest genetics are presented to commercial units purchasing replacement stock.

But, for commercial herds there are more simplistic considerations. The value of cull sows makes an important contribution to the cost of replacement stock prices have been recorded well below 40p/kg live weight – a figure that’s halved in six months – due to export restrictions imposed in the wake of foot-and-mouth disease.

And then there’s the question of how to finance a repop-restock. “Payment programmes can be tailored to individual needs. The two most common are a straight-forward payment once replacement stock is delivered to the unit or producers can opt for a royalty-based payment programme,” explains Dr Peralta.

The first has the handicap of a higher capital cost upfront in Europe and the UK, whereas royalty payments are charged on each pig reared. The latter also sees a closer working relationship between breeder and finisher exist. “Royalty payments are more common in the American markets, but you must remember the concept of restocking is almost unique within Europe and the UK due to the density of pig herds on the continent.”

It is expected from calculations using recent feed costs, overheads and performance data that payback can be achieved in two years. “In the third year there is an operating profit advantage of £110,000 or £220/breeding sow,” he adds.

The actual cost of purchasing replacement stock is a mute point with breeding companies. However, the economic realities for commercial farms are equally applicable to breeders in times of crisis.

The lack of export opportunities due to disease restrictions is seeing a number of prospective replacement gilts entering the less lucrative meat chain. For those investing hard earnt capital there’s an opportunity to thrash out an agreement on replacements costs in a bid to secure prospective profits – something that once again remains elusive in today’s pig sector.