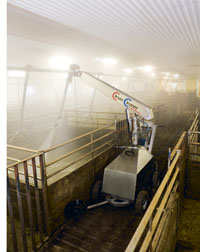 When it comes to environmental equipment, Scandinavia often leads and the rest of the world follows. This is certainly the case with the Clever Cleaner robotic pressure washer from Swedish firm Ramsta Robotics, which showed off its creation at the recent Pig and Poultry fair.

The £25,000 Clever Cleaner is designed to eliminate the need for farm workers to clean out pig houses. It’s a job that’s known to produce health problems such as backache, hearing damage and sore eyes, while the bacteria can cause asthma and pneumonia.

Masks can only partially protect the user.

The machine itself weighs 270kg and runs on wheels. UK importer Technijet says it can operate for 48 hours on a single charge from its rechargeable batteries. The cleaner also sends a text to the farmer if there’s a malfunction.

The telescopic arm sprays water at high pressure at a radius of 6m and its control system is claimed to have inch-perfect precision.

Two modes – “teach” and “manual” – can be chosen according to the user’s preference. Manual mode allows the user to direct the robot using a remote control while the arm sprays water at the dirt.

Teach mode allows the robot to “remember” the previous operation and clean automatically without supervision.

Stefan Johansson of Ramsta says: “Here in Scandinavia they do not want to go back to the days of using people to clean when a robot on wheels can do it. The farmers can spend time with their animals instead of having to do menial and unhealthy work.

“We estimate that animal health increases by up to 5% simply by allowing the farmers to what they do best – look after the animals in a clean and healthy environment”.

David Macfarlane from Technijet adds that the technology has been available for 10 years and that more than 400 cleaners are working in Scandinavia.

The first UK unit was installed at Harper Adams University College in May, and Farmers Weekly will be reporting on how the college is getting on with it.