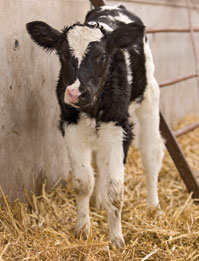 Rose veal could provide a valuable outlet for black-and-white bull calves if the experience of Linden Foods, Northern Ireland, can be replicated across the UK.

The company’s Frank Foster said thousands of black-and-white calves had traditionally been exported or shot, something many consumers found unacceptable, so a use had to be found for them. “Additionally, due to a fall in suckler cow numbers in the province, we were facing a 12-15% fall in throughput, so plant efficiency will be an issue.”

Marrying these two issues together meant making best use of these black-and-white bull calves to produce marketable meat. “Key to the success of this was encouraging dairy farmers to rear these previously unprofitable calves to eight weeks old and convincing finishers to take these calves for further rearing.”

Calves are reared in batches and transferred to finishers at eight weeks old, when they are fed a calf ration and straw until 12 weeks. “Then they move on to a high energy finishing ration which we forward purchase on their behalf to ensure all calves are fed a uniform diet and perform as expected.”

In 2007 calves were slaughtered at an average of 350days and carcasses weighed an average of 220kg, with 75% grading at O2 or better. But 10% of carcasses were rejected, so in 2008 calves were slaughtered earlier, at 285-300 days old and carcasses averaged 205kg, with 80% grading O2 or better and only 5% rejected. “The great thing about these rose veal carcasses is that they are all uniform bodies of meat and we know what we’re dealing with.”

But there are problems and marketing the product in the UK is one of the biggest hurdles, said Mr Foster. “Most of the product is marketed in Europe because we’ve had only limited success with UK retailers. There are some on-farm issues, too pneumonia is the biggest challenge, but liver abcesses can also be an issue.”

Sticking with the black-and-white bull theme was Dorset producer John Hoskin, who finishes 400 head for Blade Farming. “These might not be the prettiest animals on the farm, but they are certainly the most profitable and we are able to produce good beef for a pre-agreed price, taking a lot of the risk out of the system.

“The direct link from Blade to Tesco through Southern Counties Fresh Foods is also invaluable in giving us the confidence to produce beef from these animals.”

Alongside these 400 black-and-white bulls Mr Hoskin also finishes 600 head of suckler-bred cattle, but said more work needed to be done by store cattle breeders to address the needs of finishers. “We need to know more about the history of the cattle we buy and better martketing of store cattle could earn producers that vital extra few pounds.

“All the evidence shows that cattle by high EBV sires leave more profit, but few store breeders are telling finishers when their cattle are by these sires. That knowledge is invaluable to us as finishers and those cattle are worth paying a premium for,” he added.