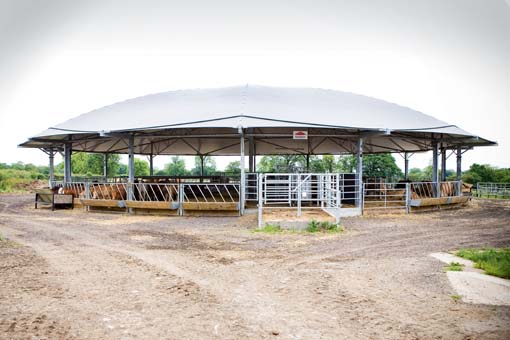 The first Roundhouse to be given the go-ahead on a National Trust farm in the Lake District will make a “huge impact” on the management of suckler cows and finishing cattle.

That’s according to tenant farmers Raymond and Elaine Richardson, whose Aberdeen Angus suckler herd has just been moved into the £130,000 building.

It was during the evaluation of new beef accommodation for 150 head to replace old buildings at Burnt House Farm, West Cumbria, that the Richardsons first considered a Roundhouse.

“The more we found out about the Roundhouse concept, the more we were sold on the idea, but getting approval for one on a National Trust farm in this part of the Lake District seemed like a long shot,” says Mr Richardson. But after much consultation the project was given the go-ahead.

This spring has seen calving suckler cows, replacement heifers and finishing cattle moved into the seven-penned, open-sided structure. Although the building, which took four weeks to construct, will be used to house a range of beef animals, it’s designed for a stocking capacity of 150 suckled calves taken to finishing weight.

Despite the incongruity of finding such an unconventional building on a typical upland farm amid some of the Lake District’s most iconic scenery, the Roundhouse at Burnt House Farm certainly doesn’t jar with its surroundings. The grey umbrella-style roof – with an anticipated lifespan of more than 25 years and constructed of a polyester-based material, coated with PVC – is aesthetically pleasing, even in this sensitive environment.

Beneath the umbrella roof the seven pens radiate out in a 30m diameter circle from the central inspection area and form the individual segments of the circular design. One segment of the circle is devoted to an impressive handling system into which stock can be drawn across the central core area from each pen.

“A gate in each pen can be opened into the area at the centre of the Roundhouse and within a few strides the cattle are moved directly into the race for treatment or to be loaded into transport. We can have cattle loaded in minutes,” says Mrs Richardson.

Although the structure is open-sided there is a 10 metre-wide funnel opening in the centre of the roof to help maintain air movement from the pens beneath the umbrella.

“We were never worried about the fact that it was open-sided and always considered it to be advantage. As soon as we started to assess the Roundhouse principle we could see how it could provide an ideal environment for beef cattle, excellent ventilation, easily operated handling facilities and total accessibility to all the cattle in the building.

“We can stand in the middle of the Roundhouse and see every animal in the building just by remaining on the same spot and turning 360°,” says Mr Richardson.

The calmness and relaxed attitude of the cattle is immediately noticeable – something the Richardsons believe is the result of the openness of the structure.

“Whenever anyone comes to look at the cattle, the stock remains completely relaxed and calm. There are no dark corners and no areas that are enclosed or may cause them to panic. We’re convinced that because there’s complete openness around them they actually think they’re outside and not penned. In this type of system cattle never feel cornered or boxed-in.”

The Richardsons supply prime cattle to Booths supermarket chain for its beef marketing scheme which is based on native breed cattle produced on National Trust farms.

“Loading finished cattle is now such an easy job. Cattle handling used to be a chore, now it’s a doddle,” says Mrs Richardson.

Water is supplied to each pen via troughs which are automatically refilled via a tank in the centre of the building that’s at the same level as each trough. Each pen has a safety exit.

“If we’d built a traditional cattle shed it wouldn’t have provided such a healthy and natural environment for the stock and it certainly couldn’t have given us any better means of managing and handling housed cattle.

“The calmness of the stock and the ease with which we can now cope with every aspect of management is already having a big impact – and the cattle have only been in the building a few weeks,” says Mr Richardson.