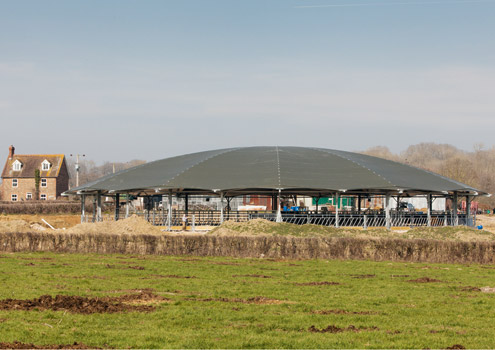 A new larger Roundhouse building design means the innovative housing concept is now not only applicable to calves, but also the main milking herd.

The best way of keeping dairy cows is in a Roundhouse, milked through robots, believes Nottinghamshire dairy producer Nigel Kirk.

He is not only the first farmer in the UK to invest in the new 45m diameter Roundhouse (Rh45), launched this spring, but also the first to use the building for milking cows.

Up until recently the 30m Roundhouse (Rh30) was not deemed big enough or economic enough for milking cows.

With a diameter of 30m, a circumference of 95m and an internal area of 720sqm this original Roundhouse could only really hold around 70-80 cows.

This year that situation changed with the introduction of the much larger building – dubbed the Rh45 on account of its 45m diameter. This has a circumference of 144m and an internal area of over 1,500 sq m and can hold around 180 dairy cows.

Currently Mr Kirk and his son Elliott, 28, and daughter Lucy, 22, are milking 50 cows on one robot, having started milking this summer.

But the plan is for their new Rh45 building to have four robots in it, with the machines installed and the cows arriving after Christmas.

Nigel also runs two machinery franchises cross the Midlands, which explains the delay between building the Rh45 and completion.

Although the precise layout of the Kirk’s building and robots has not been finalised, the idea at the moment is to have 24 pens rather than 16, with one segment an office and two robots either side. The others will be on the other side.

Locking yokes will be around the perimeter, with a slatted area 4m wide and 2m deep all around the building.

That will have a capacity of over 1,200sqm of slurry. Rainwater from the roof will be harvested, while a robot scraper will clean the slats. In the long term Mr Kirk also aims to add the new robot feeding system.

“We like the Roundhouse and believe it will be ideal for milking cows,” says Mr Kirk. “It’s perfect for animal welfare, for ventilation, and I think the cows will be happy and relaxed in there. And happy cows give more milk.

“At the end of the day it will be one of the most modern units in the country, with one man managing 200 cows if we put the robotic feeding system in. We won’t be employing any labour so believe our investment in technology will definitely pay off in the long run.”

Roundhouse building designer and engineer Geoff Simpson, of S and A Fabrications, comments: “We’re just dipping our toes into the milking cow sector.

“It won’t be for everyone, but we believe that its excellent ventilation, labour and animal welfare advantages will mean it has a major role to play on the dairy farms of the future.”

Although the cost of the Rh45 is around £150,000, compared with £57,000 for a Rh30 (excluding internal steelworks and groundwork like levelling, hardcore, water and drainage) the cost an animal is comparable to that of a good quality conventional building.

•There are no walls to the open-sided structure.

•The roof is manufactured from two pieces of tensile PVC coated polyester fabric of high strength and durability, and tensioned over the framework by steel cable ties.

•There is a 10sq m ventilation hole in the middle of the roof that vents the air.

•The roof is assembled on the ground and then raised into position, thus significantly reducing the need to work at height during erection.

•The building is designed to blend with the surroundings. Because the building and its roof are only ever viewed tangentially, the building’s visual impact is dramatically reduced. The green, matt-finished roof means the building blends extremely well into the countryside.