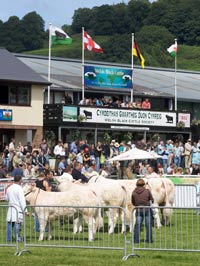 Kate Thomas, the 2009 Royal Welsh president, is predicting a successful show despite farming’s problems and the credit crunch.

Her confidence is based on what she describes as the proven skills of the society’s board of management and staff.

She also acknowledges the seemingly unshakable support of farmers and the public for the show. In fact she thinks more non-farmers could be drawn to the event. “I like to think the recession will have the effect of waking people up to the need for an active and productive farming industry.

“It simply does not make sense to be importing so much that we can produce ourselves, particularly when the country is deeply in debt.”

Though her family had connections with farming in Shropshire and the Vale of Glamorgan, Kate Thomas, the daughter of an orthopaedic surgeon, was educated at Cheltenham Ladies’ College and the Sorbonne in Paris. She had no practical knowledge of the industry until she married in 1967.

Since her husband, Edward, died in 2006 the 390 acres at Gelli Hir Farm, Nelson, Glamorgan, on which they produced milk, lamb and Christmas turkeys, has been let to a neighbour.

But her son, Richard, bought the dairy herd and now farms in Devon, from where he keeps her up to date with the industry’s problems. “Farmers have needed resilience to withstand what has been thrown at them over recent years. Bad weather, bad prices, diseases and financial crises have all played their part in lowering morale in the farming community.”