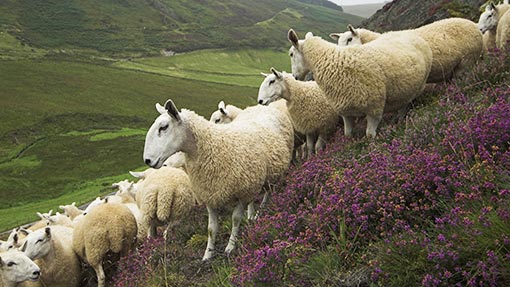 A wider uptake of share farming could enable thousands of young people to get their first foot on the farming ladder, CLA Cymru says.

And if just one quarter of Wales’ farmers aged over 65 entered into a share farming agreement, it would allow more than 3,000 new entrants to start working the land.

“Share farming not only offers older farmers a way of reducing their workload whilst maintaining an income, but it also gives new entrants an increasingly rare opportunity to start a career in agriculture,” said CLA Cymru chairman Ant Griffiths, speaking at the Royal Welsh Show.

The organisation has pointed to a number of successful examples of share farming across Wales and the opportunities it presents.

Mr Evans is fully in charge of the day-to-day running of the sheep and business enterprise, which farms 500 Welsh Mule ewes and 60 fattening cattle for stores.

Watch the video to hear about the advantages to share farming from farmer Greg Evans:

“When we have bills, such as fertiliser or feed, they all get split in the same ratio, which makes it a share farm.”

Mr Evans said the big advantage of share farming was it allowed a young farmer to get onto a farm with a modest amount of money.

“A lot of tenants have to pay their rent up front. In my situation, that would be about £20,000 to rent only half the farm,” he added.

In addition, there is less acrimony between the usual landlord and tenant relationship, because both are working together to get the best results for the business.

CLA Cymru vice chairman David Wynne Finch farms on the Lleyn Peninsula in north Wales. He has embraced share farming as a way of encouraging the next generation of talented people into farming, regardless of background.

He said share farming could help address a lack of openings for young people, especially in dairying where average herd size has rocketed from 30 cows in 1973 to 115 now and is expected to grow to 460 by 2053.

But he warned that the secret of a successful partnership lies in the attitudes of those involved.

“There has to be trust, integrity, technical excellence and an understanding of the win/win principle,” he said.

CLA president Henry Robinson added: “The great advantage of share farming for some farmers is that there is no set retirement date.

“This is a way of gently retiring. What puts a lot of farmers off retiring is that one day you are a farmer with all the excitement and status and everything else that goes with it, then suddenly you think: ‘what am I going to do when I retire?’

“Share farming is a way of maintaining involvement, maintaining a business and the advantages that go with that and yet doing less yourself.

“It’s a gradual transition and it can be set up as fast or as slowly as the two parties then require.”

For more details on share farming options and guidelines about how to set up an agreement, visit the CLA website.