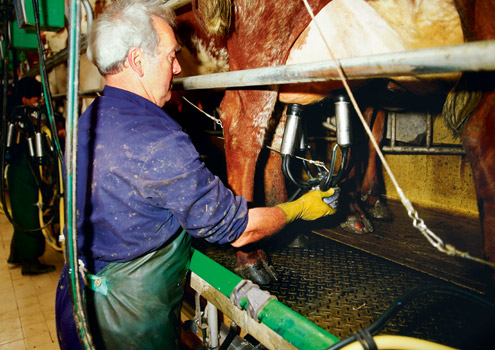 Cow flow at a Dorset dairy farm has improved since rubber matting was laid in the parlour and collecting yard.

Three times a day milking means the herd of 400 Holsteins at Limekiln Dairy in south Dorset, are standing in the collecting yard for three hours a day.

Although waiting times are less than on some units, the herd’s managing partner, Paul Harvey, was keen to improve comfort and reduce lameness.

Research suggests that high-yielding dairy cows are at risk of injuries that cause lameness due to the hard, abrasive nature or slipperiness of usual concrete flooring.

These problems can be exacerbated by milking procedure that includes crowding of cows and possible sharp turns at the entrance and exit of the 30/30 parlour at Limekiln Dairy.

As a result, Mr Harvey laid matting in half the collecting yard, the parlour and in the dispersal passageway and exit at a cost of £9,000.

At the same time he stopped feeding in the parlour, switching to full TMR feeding.

A combination of these factors has reduced milking time from five hours a milking to four-and-a-half hours – at a time when cow numbers also increased from 360 to 400.

“The mats encourage the cows to walk more positively,” says Mr Harvey. “The matting is probably as slippery as concrete, but is comfortable on their feet and gives them more confidence when they are entering and exiting the parlour.

“There are three turnings before the cows get to the exit and we really notice the improvement in cow flow at these points.”

The herd is split into three groups to limit standing times and each group stands in the yard for an hour at each milking. Matting has been laid in half the collecting yard and Mr Harvey plans to cover the remaining area.

Over the years chemical washings have damaged the concrete surface and, although it had been planed, there were loose stones.

Since laying the matting there has been an improvement in foot health, although Mr Harvey also credits regular foot trimming at drying off and 100 days in milk for this.

But the matting has been an influential factor too, says Mr Harvey. He scores the 10,300 litre, all-the-year-round calving herd on locomotion and any cows that score highly are treated swiftly.

A recent inspection revealed that 12% of the herd had an issue with foot health compared with 17% 12 months ago.

“A lame cow won’t get back into calf and a cow that is lame for any length of time will produce 1,000 litres less milk over a lactation, so if we can improve foot health by making the cows more comfortable then the payback is obvious.”

He believes matting is a better investment than re-concreting, but the mats cannot be laid on areas where the concrete is breaking up. “The concrete has to be in a reasonable condition,” he says.

“We have grooved concrete in the past, but the mats have superseded this. If you are laying mats it is pointless spending money on grooving.”

One of the limitations of matting is that it can’t be laid in all areas. Although Mr Harvey’s scrapers pass over the mats this can only be done lengthways as passing over the mats sideways will damage the seams.

“A bit of thought has to go into laying them. But for us it has definitely been worth the investment although there is the question of how long the mats will last. You wouldn’t want to be replacing them every three or four years.”

Nick Bell, from the Royal Veterinary College, says trials have demonstrated that cows show a preference for rubber matting over concrete.

In one trial half the collecting yard was rubber matted and most cows stood on it. However, some of the lame or low dominance animals did avoid it to avoid getting into fights. “This means you have to be careful about where you put it in voluntary milking systems,” he says.

Dr Bell has seen improvements in foot health when rubber is installed on rotary parlour exits or where there are sharp turns after milking.

“A number of farmers are putting in strips along feed fences which can increase feed times and intakes, although there can be issues of certain cows, mainly heifers, lying out if cubicle comfort or cubicle training prior to calving is not of a high standard.”