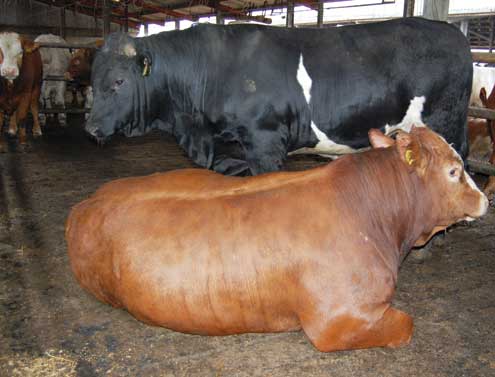 Tackling lameness is never an easy task, but creating an environment with cow comfort in mind is a good starting point for eradication.

And for the Bourns family in Lisbeg, Co Galway in Ireland, a move to rubber flooring in their slatted beef finishing system has brought their lameness problem under control.

Three years ago the family faced a serious lameness problem on their farm, where more than 1,500 cattle are finished every year; lameness was running at about 8%, and since the installation of rubber slat covers in September 2009, this has reduced to 1-1.5%.

Chris Bourns says: “The biggest advantage with the rubber slats is a reduction in lameness. Before, on the concrete, if you had a lame animal, you couldn’t put them back on the slats and you had to keep them in a straw yard.

“But now you can put them back into the group with their friends – they get depressed on their own. The animals can also get up and down more easily to go feed, and there are labour savings in not having to put them onto straw yards.”

“We started off with rubber slat covers in one shed – at first, the animals were running around the pens and straight away they were lying down – and we then did the whole lot,” he says.

“Sometimes we are buying in animals weighing from 400kg onwards, but we are not worried about leaving them inside because you can keep them on the rubber-slatted system for a long period of time.”

Management is also crucial in keeping lameness under control, and the Bourns family ensures any infected animals are injected and then foot-bathed four times. In addition, pens are lined with a thick layer of hydrated lime before a fresh batch of animals comes in.

“Daily liveweight gain is what we look out for – we aim for 1.5kg/day – and it has improved with the rubber slats because the cattle are that much happier,” adds Mr Bourns.

And in terms of payback on investment, he says the system has paid for itself in the equivalent of five winters (2.5 years on his system where animals are being finished year-round).

In the future, Mr Bourns hopes to build a straw-bedded shed to quarantine animals when they first come onto the farm – they will then be put into the slatted unit, and where possible outdoor grazing, for finishing.