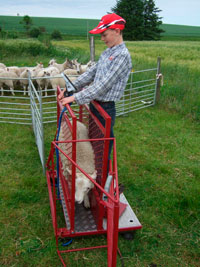 The inventor of the award-winning Cattle Catcher Crate, Bill Ritchie, has launched another piece of animal handling machinery set to make weighing and tagging lambs a whole lot easier.

However, the BIBBB Squeasy Lambweigher (which won a gold award at the Royal Welsh) consists of a platform on which the operator stands, one fixed side (made of expanded flat metal), which the operator leans on, and a bottom-hinged side away from the operator. This also houses the weighscale indicator.

The operator stands on his part of the platform, pressing the button to deduct his own weight.

Supplied with the lamb weigher is a foot-operated shedder, enabling the operator to weigh and shed continuously without moving.

The whole unit, including the weigher and display, costs £1600.