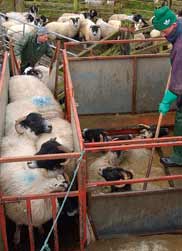 Sheep farmers in Scotland want a full-blown eradication scheme to get rid of scab in Scottish sheep flocks, but they may not get the backing of the country’s chief vet, Simon Hall.

Mr Hall is sceptical about the effectiveness of an eradication scheme, but says legislation, which has already been drafted, could be in place next year if the industry wants it. “I’m not convinced that eradication can be achieved – compulsory dipping hasn’t worked in the past,” Mr Hall told sheep farmers attending a National Sheep Association sheep scab briefing on the farm of NSA Scotland chairman, Jimmy Sinclair, at Crookston, Heriot, Midlothian.

“The controls which would be necessary to make eradication effective would not be acceptable to the industry. But the Scottish government is prepared to put compulsory half measures in place if the scheme has the overwhelming support of sheep farmers although this could be costly and ineffective.”

A straw poll of the 200 farmers attending the meeting voted by a large majority in favour of the proposed compulsory measures being introduced.

The proposed “half-way house” legislation would require farmers to report suspected sheep scab to local authorities and would include enhanced powers to prevent the movement of infected sheep. Details of treatments would also have to be included in an annual declaration and non-treated animals certified by a vet as being free from scab.

But vets in the audience dismissed the proposed declaration as pointless and suggested they would not be prepared to sign such a declaration because sheep scab could be present sub-clinically flocks.

The Sheep Scab Order prohibits the movement of sheep which are visibly infected with scab and states that visibly affected flocks must be treated. But, says Mr Hall, powers of enforcement are “weak and inadequate”.

Vet Neil Sargison, senior lecturer at the Royal (Dick) School of Vet Medicine, said only a UK-wide scheme could work, as lack of border controls on sheep movements would undermine a Scotland-only scheme.

But he added that a pilot regional eradication scheme, based on neighbouring farmers working together and synchronising treatments, had proved successful in the past, although it had proved difficult to sustain in the absence of the goal of total eradication.

“Sheep scab is often diagnosed and treated at different times in neighbouring flocks which illustrates the futility of preventive measures on individual farms in areas with large sheep populations,” said Mr Sargison. “There is a clear and pressing need for the reintroduction of a national sheep scab control programme, backed up by statutory powers to deal with the disease in problem flocks.”

The only dip licensed for the control of scab is the organophosphate diazinon. Pour-ons and shower dippers are ineffective as sheep need to be dipped in the solution for one minute with their heads submerged twice during this period.

But a new product launched at the event could be central to an eradication plan, claimed manufacturer Fort Dodge. It’s new product, Cydectin 2% LA for Sheep, is licensed for the treatment and prevention of both scab and worms in sheep. A single injection protects against scab for 60 days and worms for up to 111 days.

If all sheep on neighbouring farms are injected within a six week period as part of a local eradication programme, the 60-day protection provided by the injection would eliminate scab from the area, said Fort Dodge vet, David Bartram.

“Up to now with non-persistent products, all sheep in an area have had to be treated on the same day. This new injection makes a scab eradication programme infinitely more practical and achievable.”

Compulsory dipping hasn’t eradicated scab in the past, so it’s not central to the Scottish government’s plans to control it.