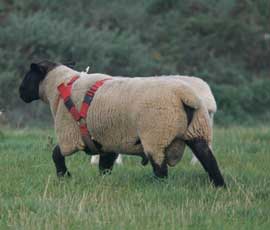 Experienced flockmasters admit to being shocked out of their comfort zone by the latest evidence from the Scottish Sheep Strategy (SSS) which proves yet again that using high-index tups will result in improved carcasses and significantly higher financial returns.

The results of the first year of Suffolk breed trials at three Scottish farms show that for the 584 lambs involved, the use of high-performance sires generated an increased return averaging £2.69 a lamb compared with the so-called “farm choice” sires, that are selected by the farmer and whose genetic merit is not known.

Three farms joined the trial: Morrisons Farm at Dumfries (which saw a benefit of £1.19 a lamb from using high-index tups); Wellheads Farm at Huntly (a benefit of £3.13 a lamb) and Kings Arms Farm, Ballantrae, which achieved the highest boost from the proven genetics, with an extra return of £3.91 a lamb.

Kings Arms runs a flock of 1,400 mules on light, west coast land. The ewes are lambed in February with the aim of hitting the early prime lamb market in May through to early July. All the Kings Arms tups – both the “farm choice” and high-index sires – were bought at Kelso by farm owner Robert Dalrymple and his farm manager, Andrew McLean. They bought on the basis of “look and feel” and Andrew said that if he didn’t like the look of the genetically-proven animals he wouldn’t buy them, regardless of their impressive figures.

He added: “The same price was paid for both sets of tups and it’s hard to admit, but the high-index sires were quite different from what I’ve chosen for years. I’ve been shocked out of my comfort zone and last autumn we bought a high-index tup, not for the trial, but for our normal sheep production.”

Over the previous four years of the SSS there have been trials on four different breeds of tup on six farms, using different management and marketing strategies. They all proved conclusively that high-index tups consistently outperformed tups selected in the traditional manner.

SSS chairman, Maimie Paterson, said the improvement was achieved by a combination of factors, each contributing to the overall margin.

She added: “The lambs were slightly heavier and had slightly better conformation. They also reached target weight and cover at a younger age and had a better survival rate.

“The rationale for initiating a trial using Suffolks was the breed’s ability to sire lambs which grow quickly and reach market specification at a young age. We felt it was important to see whether or not the same benefits could be shown in this type of faster finishing system.”

However, the challenge now for the industry is to get more farmers to adopt the technology rather than rely on the age-old techniques of visual assessment and traditional preferences.

SSS development manager Rod McKenzie said: “Once more we have proved that on different farms, with different constraints, there is a consistency and reliability in using high-index tups that rewards the lamb producer handsomely.

“The numbers are right, the message is right and the cash is there. It’s quite simple, these high-index tups are genetically programmed to make more money.”