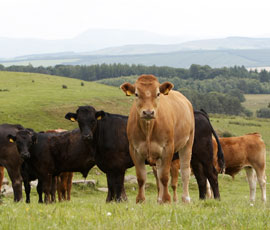 The Scottish Government has proposed a movement ban on persistently infected (PI) cattle as part of plans to eradicate bovine viral diarrhoea (BVD) and save the country’s farmers £50m-£80m over the next 10 years.

The government has already spent £180,000 on subsidised testing for BVD in Scotland, and all herds must be screened by February next year. Now a consultation has been launched into the latest stage of the scheme. The proposals include a ban on knowingly moving or selling PI animals, other than straight to slaughter, and a requirement that the BVD status of herds or animals must be declared before sale or movement from 1 February 2013.

BVD is thought to be present in about 40% of herds in Scotland, and rural affairs secretary Richard Lochhead said he intended to make it an offence to knowingly move or present for sale a PI animal.

“They’ve been called ‘virus factories’, and shutting down trade of these animals will go a long way to stopping the spread of BVD,” he said.

“As requested by industry, if farmers are to be able to safely source cattle, they need to know the BVD status of the cattle on the market, so we intend to require a BVD declaration to be made before sale or movement, other than to slaughter.”

NFU Scotland president Nigel Miller said there was widespread support among producers for blocking movement of PI animals and called on all farmers to engage in the debate.