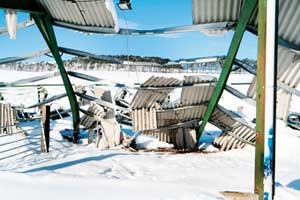 The prolonged period of snow, which prevented shoppers getting to the shops, reduced the demand for pork in Scotland and the co-op was forced to subsidise the haulage of pigs to abattoirs south of the border.

Surplus for the year fell to £4,176 compared with £58,274 the previous year, but this was after refunding £31,063 to producers in unused promotional levies.

“The surplus would have been much higher had we not hit such difficult trading conditions at the end of the year,” said chairman, Sandy Howie.

“The Northern Ireland sales figure is hugely encouraging and is an area of the business I would like to see grow significantly,” Mr Howie added.

The co-op’s Porklink agreement with Vion and Asda received recognition during the year with the award of the Scotland Food and Drink Excellence Award for “Success through working in partnership”.

“The value Asda place in the Porklink agreement was evident when the supermarket announced an 8p/kg deadweight boost for all Porklink pigs for a period to help alleviate higher feed prices,” said Mr Howie.