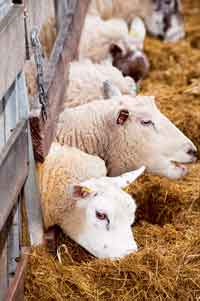 Scrapie prion pathogens in the farm environment could be a long-term source of infection to sheep and cattle, according to ADAS scientists.

Tests carried out at a sheep farm with a detailed history of endemic scrapie, revealed the presence of scrapie causing proteins in metal gates, water troughs, feed troughs, penning structures, and plastic and wooden fence posts, at least three weeks after their last contact with infected animals.

By contrast, similar structures from a different farm, housing sheep known to be scrapie-free, had no detectable contamination.

If these findings are correct, it may have implications for healthy flocks moving on to farms thought to have been thoroughly decontaminated following previous cases of the disease.

Thanks to rigorous health controls, robust biosecurity procedures and the implementation of a selective breeding programme in sheep, the prevalence of transmissible spongiform encephalopathies (TSEs), such as scrapie, in the UK has fallen to very low levels, with these diseases no longer impose a serious economic or epidemiological burden on British farmers.

However, the key implication from these investigations is that previous understanding of the risks of TSE infectivity may be incomplete. It is not known whether the levels of environmental contamination that ADAS were able to detect are sufficient to cause disease in exposed animals, but further and more detailed research may yield the answer.