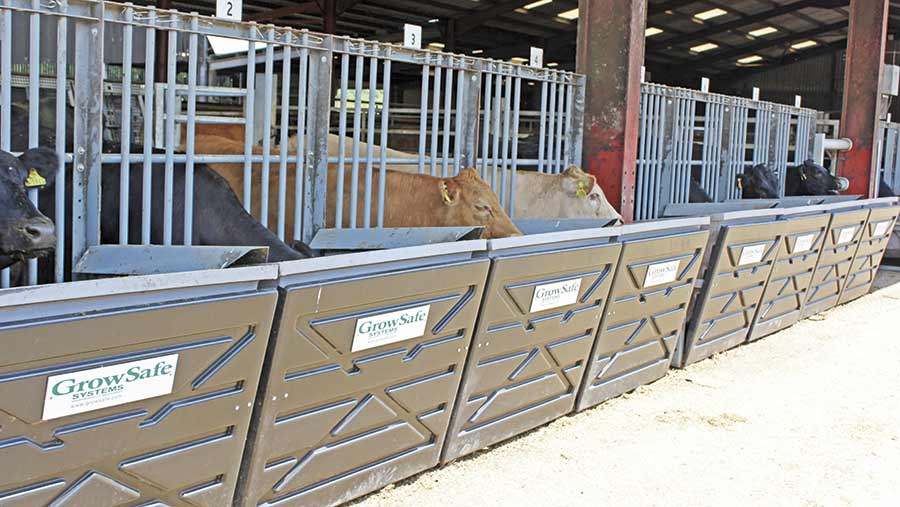 Including feed efficiency in the genetic selection indices of beef cattle has the potential to increase farm-level profit by 39% and reduce greenhouse gas emissions by about 22%.

Preliminary results from an AHDB and Scotland’s Rural College (SRUC) project, measuring the feed intake records from 1,200 cattle, has found daily feed intake can vary considerably between the progeny of different sires growing at the same rate.

Although the programme has not yet generated sufficient records to work on the genetic analysis, the preliminary performance data is showing some interesting trends: 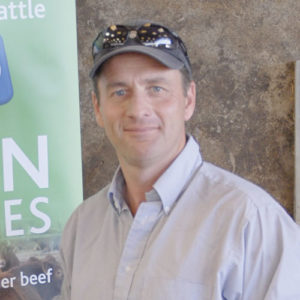 The calves were sired by two different Limousin bulls and progeny has averaged daily liveweight gains of 1.68kg a head a day with average dry matter intake averaging about 8.5kg a head a day.

Compared to the average weight of the cattle in the group, both sire groups were among the heaviest at the start and finish of test, with growth rates in the top 5%, says Ms Vickers.

The ration used during the recording phase is based on grass silage, barley and a protein blend to be typical of the majority of commercial beef rations.

‘Feed intake and growth rate of calves on feed efficiency trial’ shows the average growth rate and feed intake of the calves submitted by Mr Needham.

Cattle with relatively lower feed intake for the same level of performance are the most feed efficient.

The circled dots illustrate the performance of two animals which grew at the same growth rate during the recording period (1.5 kg/day,) but had a dry matter intake that differed by 11% or 0.9kg/day of feed DM.

During a 100-day finishing period, this type of response could deliver a feed cost saving worth approximately £22 a head, the equivalent to a reduction in feed cost per kg liveweight gain of £0.17.

At the end of the project, the programme will continue through the ongoing availability of the feed recording facilities, which will be available to breed societies and breeders who wish to generate breeding values for their breed.

How far through is the project?

Two-thirds of the way through the recording phase.

How many farms are involved in the project?

An additional funding partnership with the Scottish government and ABP Food Group has meant a recording unit in Scotland has been set up and has already hosted its first batch of 136 animals.

The Scottish unit, together with a pre-existing unit in Dorset and two new units in North Wales and North Yorkshire, means the programme now has much greater flexibility in terms of sourcing suitable cattle and has increased capacity to record greater numbers of animals.

To identify the genetic differences between the sires of those animals in terms of how efficiently they convert feed to liveweight gain.

The objective is to collect feed intake and performance data from no less than eight calves per sire from more than 200 Limousin bulls used across the UK.

Identifying sires and dams whose genetics mean their progeny eat less, but grow at the same rate is what this project is all about. The aim is to collect sufficient records to generate breeding values for the Limousin breed to demonstrate the approach of using commercial growing cattle recorded for feed intake on commercial farms, with the data linked back to the pedigree herd.

The project has also established industry standards for recording of feed intake and will determine an agreed measure of feed efficiency to be included in selection indices.

How is feed intake measured?

Investment in equipment which accurately measures feed intake, along with electronic identification of the cattle, means the measurement of individual daily intake is now feasible with a high level of accuracy.

What other tests are carried out to give an accurate measure of feed efficiency?

Feeds are regularly oven dried to determine dry matter content of the ration, cattle are weighed weekly and are ultrasound scanned at the start and end of the test period.

An ultrasound scan uses high-frequency sound waves to create images of the inside of the body.

Images taken over the loin area provide measurements of the layer of subcutaneous fat in that area. This enables composition of the liveweight gain to be incorporated into the model for recording feed efficiency, as the feed requirement for laying down lean tissue is different to that required for fat deposition.

The Beef Feed Efficiency Programme is part of AHDB’s wider Farm Excellence Platform, which inspires the industry to improve performance and succeed through farmer-to-farmer knowledge exchange.

The programme is continually looking for suitable cattle that can be purchased or retained on a bed and breakfast arrangement for feed intake recording. Feedback on cattle performance is available.

Any producers with Limousin-sired cattle aged eight months or less who are interested in understanding how their cattle could participate should contact Natalie Cormack on 07866 934 563/01890 781 006 or email natalie.cormack@ahdb.org.uk.