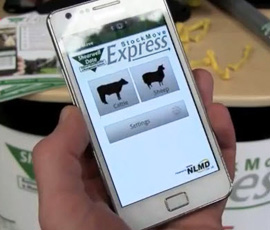 Shearwell Data has launched a smartphone app which allows farmers to record livestock movements, births and deaths from the field.

The app, called Stock Move Express, runs on Google Android phones and is designed for use with both sheep and cattle.

Speaking at Sheep 2012, software developer Chris Lewis said the app was designed to be user friendly and would help producers meet their statutory recording requirements.

There is a free version of the app which enables farmers to view livestock details and record movements in the field either by keying in the animal tag or by using an EID reader which links with the app.

EID tags can be read with a stick reader and then transferred instantly to the phone either individually or in batches. Details such as the haulier used to move animals can also be recorded.

The data collected can then be uploaded direct to the free National Livestock Movement Database website, or alternatively farm software that connects to the open standard NLMD, and used to generate personal reports and movement records.

Farmers wanting to use the app to record births, deaths or tag replacements can pay £9.99 to upgrade to a more detailed version.

Cattle farmers can also use the app to send births, movements and deaths to BCMS.