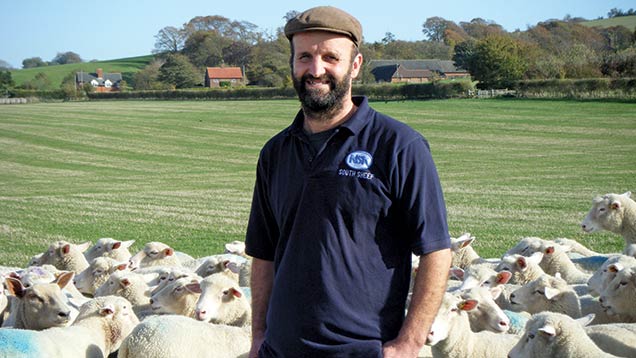 Combining artificial insemination with a composite breed is the key to one Oxfordshire farm’s success, with December lambing at an average of 220%.

Cervical artificial insemination (AI) has been used for more than 30 years on mature ewes at Warborough Farm, Wantage. Initially it was used to set up a cross-bred flock of Polled Dorset and Finish Landrace ewes.

The farm now markets about 3,000 early spring lambs a year sired by high index terminal sires on top of the 400 replacement ewes that enter the flock each year.

“We aim for the Easter market and got £90-100 a lamb last year. The average lamb deadweight was 19.6kg,” says farm owner Tony Good.

The Polled Dorset is chosen for its out-of-season breeding capabilities and meat qualities, while the Finish Landrace adds prolificacy to the mix, explains Mr Good.

“As a purebred the Finish Landrace will lamb at 300%; the Dorset by itself is not prolific enough. Maintaining prolificacy is very important to enable us to sell the maximum amount of lean meat a ewe,” he adds.

With two-thirds of the 180ha farm in Higher Level Stewardship, the breed has to do well on rough grass and Mr Good believes they outperform many breeds in terms of longevity and surviving on what is in front of them. And of the 2,000 breeding ewes, more than one-third are five years or older.

“We couldn’t finish the 3,400 lambs a year on the grass we’ve got, but because we have the buildings this enables us to stock more ewes. We have to intensively rear large numbers to justify what we’re doing and AI-ing has been key to making this possible,” adds Mr Good.

Flock manager David Barber has been at the farm for 28 years and along with the Warborough flock, was contract inseminating about 10,000 ewes a year before the foot-and-mouth crisis.

“When it comes to AI-ing, there’s plenty that can go wrong, but it is fairly simple. We average an 80% conception rate,” he says.

In his experience, the big advantage of AI is gaining control over lambing management. The Warborough Flock begins lambing in early December to maximise returns from the early spring lamb market.

“The problem with early lambing is you’re pushing the sheep to the limits of what their body can naturally do. Artificial insemination helps to facilitate this,” he says.

Mr Barber and his team of four daytime assistants and one nightworker will lamb 1,000 ewes in under a fortnight, but progesterone sponging (to synchronise oestrus) gives control over the number of ewes lambing at one time. This creates an even flow, crucially avoiding unmanageable peaks and reducing mortalities, he says.

“AI from one day will result in lambing over five days. With a 75% conception rate, you can expect 25% to be lambing on any one day. We AI every other day so as the first lot tails off the next lot will start.”

Another huge benefit is fewer rams are needed on farm, allowing money to be invested in superior quality genetics, says Mr Barber.

“You can make better use of genetics you have by spreading them across more sheep. Each jump by the ram gives 1-2ml of semen which, once diluted, increases to 4ml. You’ve got enough from one or two jumps to serve 40 sheep – this is equivalent to a year’s work by one ram in one day,” he adds.

Mr Barber believes these benefits far outweigh the cost of AI, which with shopping around and buying sponges and hormone injections in bulk, he says is about £3 a ewe.

“There is no problem with labour shortage as we are not lambing at the peak time. Better supervision also reduces newborn losses.”

There are six family groups, each of about 300 Polled Dorset cross Finish Landrace. From these groups a “super ewe group” is selected, based on a lambing percentage of more than 265% and very low incidence of foot-rot. From this group the replacement rams are selected, and these are usually one of a triplet.

“Conformation of ram lambs is important. We tag six from each family as potential breeders, then select two from those later on, based on growth rates,” says Mr Good.

There is a 20% replacement rate, with the 100 best mature ewes from each family group chosen to breed replacements. These are selected mainly on prolificacy and must have averaged 165% over their first two lamb crops.

“They’re only ever considered for breeding replacements once they’re three years old [four-tooth]. The lambs born give us something to base our decision on. Plus ewe lambs don’t do as well as replacements,” says Mr Barber.

He also avoids breeding from those that have had two or more cases of foot-rot within a three-year period. He then carries out a visual assessment of teeth, udders and conformation.

The poorer performers will go to high-index Charollais or Suffolk terminal sires and their lambs will go for slaughter.

“AI is used partly to help avoid inbreeding and is also useful as a management tool. It’s a cheaper way of mating and getting better genetics for either meat or breeding purposes,” says Mr Barber.

Ewes are assessed yearly and may switch between breeding replacements or slaughter lambs. The use of electronic records since the early 1990s aids the selection process. Ewes average five lamb crops, but individuals can live for up to eight or nine years, he adds.

Mr Barber advises against AI-ing ewe lambs as you have to break the hymen (membrane stretching over the cervix). Inserting a sponge at this time results in scar tissue and the sponge gets stuck.

All ewe lambs and any mature ewes which do not hold to AI are run with rams and mated naturally to lamb in January. Shearlings are also AI’d to lamb with this second group.

The culling policy is based mainly on age, but also includes those with problem udders or who are persistently barren.