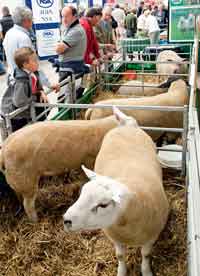 The UK sheep industry is disjointed, uncoordinated and focuses on the wrong traits in its breeding, according to New Zealand farmer Murray Rohlof.

Speaking at the event’s seminar, “UK genetics, fit for purpose”, Mr Rohlof said breeders should focus their efforts on traits which would reduce costs and increase profits for their commercial customers.

“The focus must move away from breeding for exceptional shape and refocus on the economically important traits of growth, prolificacy and cost of production. You have to remember 60% of carcass value comes from the loin, 30% from the legs and 10% from the shoulders and stop focusing your breeding on the two lesser value parts of the carcass.”

This message was one the New Zealand industry had taken on board many years ago and breeders there were now focused on selecting sheep suited to retailers’ demands, he added. “There is no need to reinvent the wheel, New Zealand has the genetics to help the UK sheep industry prosper and UK farmers should make the most of the opportunity they offer.”

“There is far more benefit to be gained from learning about other aspects of sheep management from New Zealand, such as grassland management, than there is from thinking UK genetics can be a one-stop shop. We should be applying New Zealand and Australian philosophies to UK sheep farms and making progress with the genetics we already have here.”

Meanwhile, Signet breeding services manager Samuel Boon told the audience it was important not to ignore the genetics already in the UK. “There are maternal and terminal sire genetics in the UK which other countries would be proud to have. I’m not against introducing new genetics, but they have to be tested and pushed to perform when they come into the UK.”

And while Mr Rohlof said UK commercial farmers were being hindered in their selection of new genetics by the lack of an across breed EBV analysis, Mr Boon said the bigger challenge was that only 15% of terminal sire flocks were performance recorded.