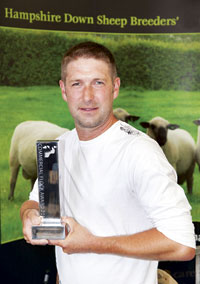 Winner of the Caltech Hampshire Down Commercial Flock of the Year Award 2010, was Andrew Snow, Stroud.

“His combination of knowledge-based enthusiasm for sheep farming, understanding of business management and forward thinking and positive outlook were a winning combination,” he said.

“Overall I was impressed with the standard of each of the finalists’ flocks and this gives me confidence there is a strong and profitable future for sheep farming.

“Knowing there are young sheep farmers out there like Andrew is the best possible news for the industry and shows there is a bright future for people wanting to farm sheep for a living.”

The runner-up was David Harrison, Chipping Camden, who also received the Caltech award for the flock demonstrating best nutrition. According to Caltech’s David Johnston, Mr Harrison demonstrated the ability to make the best use of his own resources on a relatively large scale.

• For full coverage of the NSA 2010 Sheep Event click here.