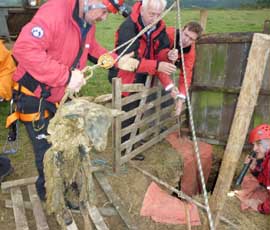 A caving rescue team has helped to save 12 sheep which had fallen into a North York Moors sink hole.

Cleveland Search and Rescue service and York Caving Club joined forces to save the sheep after the alarm was raised by North Yorkshire Police.

A total of 24 sheep had fallen into the hole which is the entrance to a system of caves known as Windy Pits, near Old Byland, Rievaulx.

A spokesman for Cleveland Search and Rescue said that the sheep had fallen to a point about 50 feet below the surface after they broke through fencing around the hole.

“Three members of York Caving Club had already rescued four sheep by the time we got there,” he added.

“Then two members of our team went into the hole and positioned themselves on a ledge about 15 feet below the surface to provide safety cover for the cavers, who could then descend deeper.”

The spokesman added that ‘a dozen or so’ sheep had been killed in the fall.