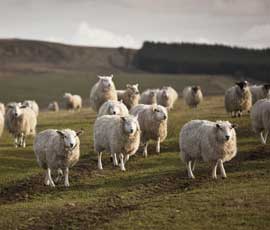 Sheep rustlers have raided a farm in the Scottish Borders, stealing 10 sheep and 43 lambs.

Police are probing the theft of the animals at South Fallaknowe Farm, near Eyemouth, Berwickshire, over the past three weeks.

A spokesman for Lothian and Borders Police asked anyone who had seen any suspicious behaviour in the area in recent weeks to contact them.

Livestock rustling is believed to cost Scottish farmers more than £250,000 a year.

“In the past year we have seen a worrying increase in thefts in all livestock-rearing parts of the UK,” he told ITV News.

“There is a close correlation between the price of commodities and the level of theft. Recent years has seen thefts of metal rocket when scrap prices have been high; thefts of diesel from farms increase in line with oil prices and now the same thing appears to be happening with livestock.”