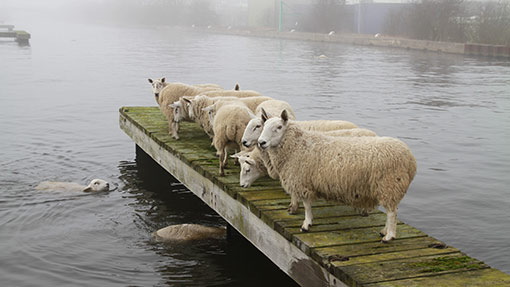 Two sheep drowned but four were rescued after they jumped into a canal in a suspected sheep-worrying incident.

Onlookers said the sheep leapt into the water after being chased out of a farmer’s field by an Alsatian dog.

Humberside Fire and Rescue Service was called to rescue the animals from the canal at Rawcliffe Bridge, near Goole on Saturday morning (1 March).

Ten firefighters used a 40m hoseline as a makeshift harness to haul the sheep to safety from the canal during a two-and-a-half hour rescue operation.

A further nine sheep that were standing on a jetty were prevented from jumping into the water.

Father and son Brian and Mike Gelson, who were travelling along the canal at the time of the accident, helped firefighters pluck the sheep to safety using their 57ft narrow boat, Megan Louise.

Yachtsmen Peter and Cathy Lloyd, who were travelling along the canal at the time, also stopped to lend a hand.

One onlooker said: “The sheep were just worn out – they were absolutely shattered.

“With each one that was pulled out, either one of the guys on the boat or the firemen stood with them to keep them calm. One sheep was foaming at the mouth. It was very disconcerting.”

Humberside firefighter Andy Ellis, who led the rescue operation, said: “When I arrived on the scene, I was told there were sheep in the water. I quickly saw two animals floating and obviously dead.

“I made a quick decision to lasso two live animals to keep them above water. I requested extra assistance.

“Two firefighters donned full water rescue gear. One went in the water. Using a 45mm hose, we made a makeshift harness and used manpower to lift each sheep out.

“We were grateful for the assistance provided by two boats and their crews.”

The shepherd, known only as “David”, turned up later to collect his sheep.

The NFU and the British Veterinary Association (BVA) are urging owners to keep their dogs on leads around livestock, especially during the spring lambing season.

BVA president and vet Robin Hargreaves said: “It is good practice for owners to keep dogs on leads at all times when walking near livestock but it is particularly important during the spring.

“Even dogs who are usually calm and good-natured can become very excitable and difficult to control when faced with livestock.

“Tragically this can lead to chasing, attacks and fatalities for sheep and other animals.”