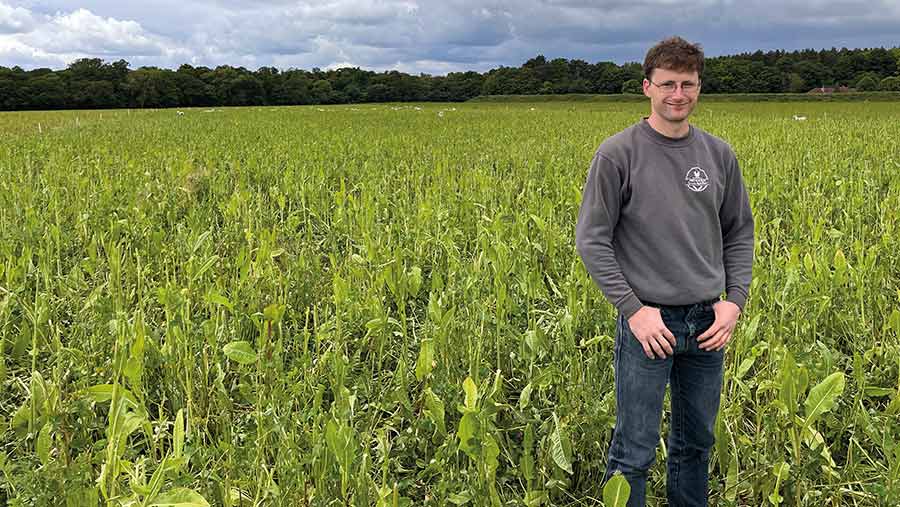 Bringing sheep onto a Hertfordshire farm to graze multispecies leys and cover crops has helped improve soils and control blackgrass on the arable land, while becoming a profitable livestock enterprise in its own right.

Angus Mackay and his parents, Daniel and Lorna, had been discussing the possibility of incorporating cover crops and grass leys into their arable rotation at Symondshyde Farm, near Welwyn Garden City, for some time.

But they were reticent to incur extra costs with no guaranteed return and, at the time, no livestock of their own.

See also: What to consider when growing lucerne to graze sheep

It was only when an opportunity arose in 2016 to take on a grazing licence on 121ha (299 acres) that they decided to buy 300 New Zealand Romney ewe lambs and start their own flock.

The grazing platform this summer consists of 145ha (358 acres) of grassland and 13ha (32 acres) of a multispecies ley.

Most of the platform is permanent pasture, which is set-stocked at low rates to cope with dry spells.

“We have dabbled with rotational grazing of the pasture without much success,” says Mr Mackay.

“We have a lot of gravelly soils, and, unless you get rain every two weeks, it just stops growing. Where we’ve tried rotational grazing, we can get back to the start [of the rotation] and grass hasn’t actually grown at all.”

Each year in autumn, once grass covers are grazed down to 1,500kg dry matter (DM)/ha, all sheep are moved onto cover crops for the winter.

Lambs are moved to stubble turnips and the ewes graze a variety of cover crops, partly depending on what is available in the local area.

For the past few years, the sheep have been grazing a lucerne, red clover and chicory ley on tenanted ground.

However, having lost that grazing in 2021, the only block of multispecies paddocks is now based at the home farm. 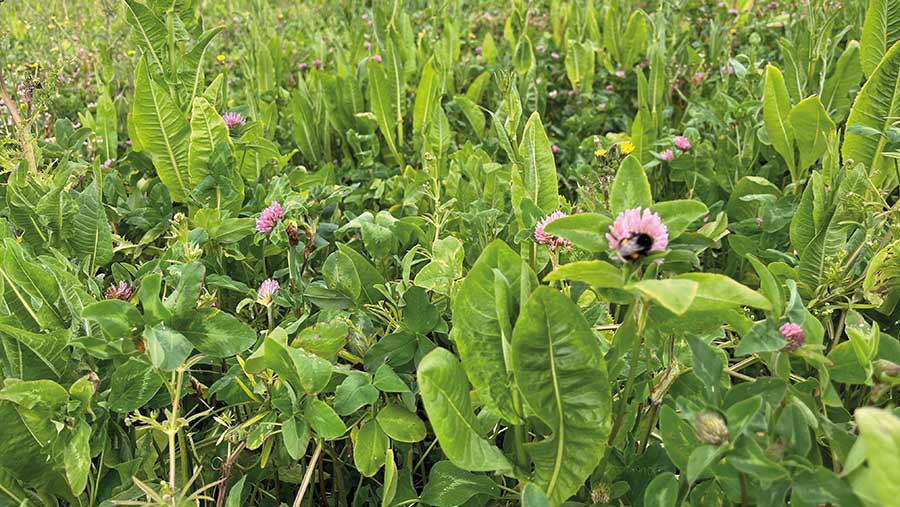 “One of the key things when planting this ley was keeping grass out of there,” he explains.

“From an arable perspective, the grass will carry take-all [a disease of wheat] and it’s very difficult to establish anything after grass.

“When that turf starts to die down, it locks up nitrogen and it’s a very hostile environment for trying to establish a seed into.”

The white clover is especially good at covering a patch of ground where slugs have thinned it out. This is good for weed suppression as well as providing food for the sheep.

The chicory is well suited to the dry conditions, even if it is quite difficult to manage because of its rapid growth.

“We have to stay on top of mowing around the fences to prevent them from shorting, and be careful that the chicory near the fence doesn’t grow too tall and fall on top of it,” he says.

The ley is split into six paddocks, each grazed for five days, and is currently stocked with 115 ewes and 240 lambs.

Following weaning, each ewe will be replaced with three lambs, so it will be grazed by a total of 600 lambs.

The multispecies mix gives some flexibility in the grazing system: in a period of drought, the stocking rate on the clover and chicory mix can be doubled, shortening the rotation to 15 days, while waiting for rainfall to kick off grass growth.

The herbal leys are direct-drilled straight after combining and are then rolled, usually twice.

“In August we generally haven’t got a lot of moisture here, so if we start cultivating, we are going to lose all that moisture and [the leys] just won’t grow,” Mr Mackay says.

Approximate costs of establishment are:

Following establishment, slug pelleting is required, and, in early spring, pigeons need deterring. But weeds are generally choked out – except for thistles, which are a bit of a problem.

“We have also tried broadcasting the seed,” Mr Mackay says. “When we established the multispecies ley we’ve now lost, we broadcast it into standing spring barley in mid-July.

“It all germinated in the bottom of the barley and we harvested the barley about a month later.

“It worked well, but only because there was torrential rain, with humidity never below 90%.” 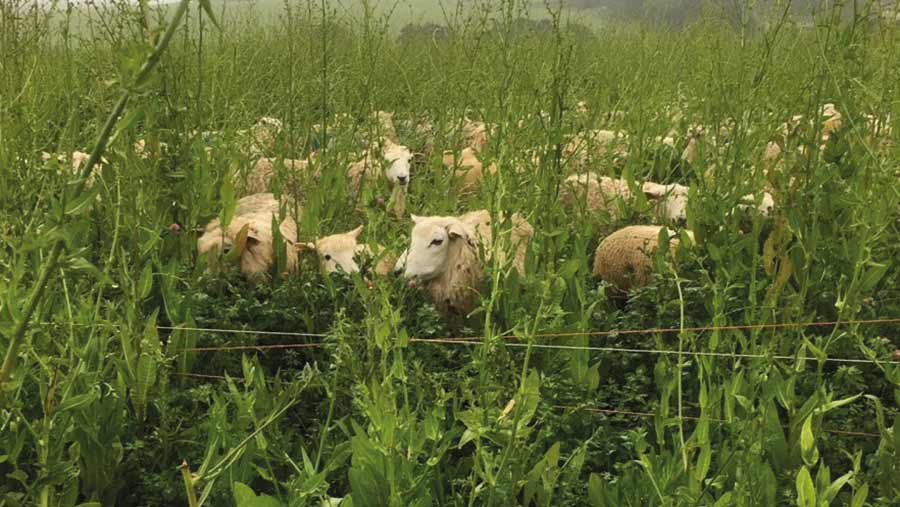 Mr Mackay says the multispecies leys are providing a fantastic entry for the following crop of wheat, and the sheep, which are run as a separate business, have become profitable in their own right.

“We are not measuring organic matter yet, but we spend a lot of time digging holes, and the herbal leys and cover crops are definitely improving the soil,” he says.

With the increased input costs in recent times, he estimates the cost of rearing a lamb has gone from £50 a head to £60. He is budgeting for a conservative profit of £40 a lamb.

Last year, on the previous ley including lucerne, the lambs were achieving growth rates of 350g/day. Weighing this year’s lambs on the new clover and chicory mix will begin at weaning.

“The lambs, visibly, are doing better than the lambs we have elsewhere on grass and the ewes are in better condition,” Mr Mackay says.

Main challenges of starting a new flock on the arable farm

Solution: Build a phonebook of contractors and look after the sheep within the family team while employing more labour on the arable side instead

Solution: Follow a good vaccination protocol, maintain a closed flock with only rams bought in, and follow gold-standard quarantine procedures before introducing them to the ewes

Challenge: A lack of water and fencing

Solution: Take advantage of grants where possible and, to fit in with the arable workload, use a temporary solution if it is more reliable than a permanent one (for example, using water bowsers rather than trough networks)

Challenge: Nearest livestock market is 90 minutes away by road

Solution: Supply a supermarket which collects the lambs, rather than trying to transport thousands of lambs to market in the winter months

Challenge: In spring, a fine balance needs to be struck between grazing the sheep on the cover crops for as long as possible to maximise weight gain, and getting the next arable crop planted to optimise establishment

Solution: Run their own flock rather than having a grazier in, to retain full control of timings.

Angus Mackay has two top tips for getting into sheep:

1. Get advice, even if you have to pay for it

“Get advice from shows, neighbours… anywhere,” he says. “We wouldn’t have been able to do what we’ve done without the help and advice we have received, both what we’ve got for free and paid for.”

The Mackays sought a lot of guidance on sheep and grassland management from independent sheep consultants Liz Genever and Kate Phillips.

They also got advice from fellow Hertfordshire arable and sheep farmer Rob Hodgkins, from whom they bought they original 600 ewe lambs.

“I’ve come to the conclusion that a temporary solution that’s reliable is better than a permanent solution that is unreliable,” he says.

“In some fields with troughs, we still take a water bowser because I know then that we take a bowser on a Monday, Wednesday and Friday and the sheep have enough water.

“That’s easier than finding out we have a broken pipe in a field 25 minutes’ drive away. Especially during harvest, organisation is key.”