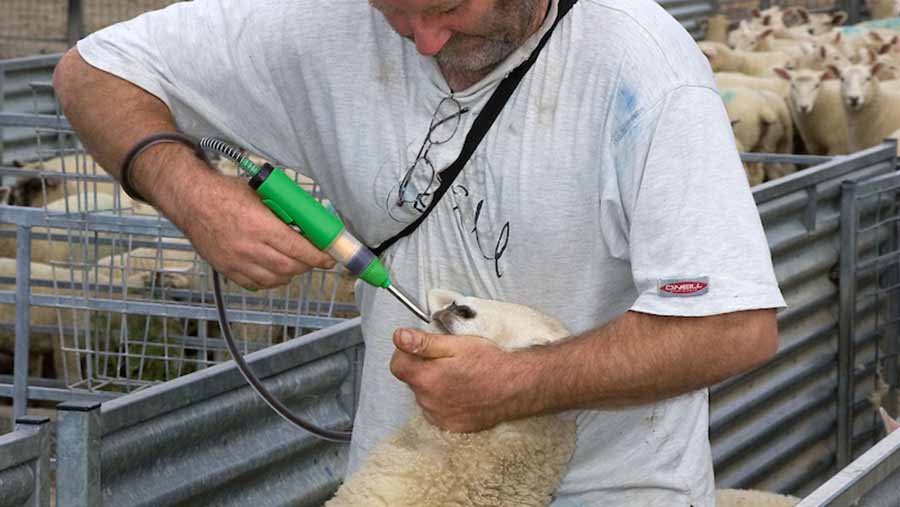 Testing for anthelmintic resistance in sheep is important to get parasites under control. We talk to Ben Strugnell of Farm Port Mortems, County Durham, to find out the best way to do it.

“Which wormer should I use on my lambs?” is a common question vets encounter later in the season.

“Worming your sheep is a bit like buying your partner a birthday present – the one you choose might be sufficient, but you will be wondering if a different one could have done a better job,” says vet Ben Strugnell.

Mr Strugnell advises that while an orange drench is a great way to knock out resistant parasites in your lambs later in the season, money could be saved by finding out whether the cheaper and older white, yellow and clear wormers work by testing resistance to them.

See also: How to work out your flock’s trace element requirements

Current advice is to use a group four or five [orange or purple] at least once a year as a break drench to take out resistant worms persisting in the lambs after ineffective treatments.

This should be viewed as an investment in the future as it will slow the development of resistance to white, clear and yellow wormers.

Below, he sets out why resistance testing is so important and how to do it.

Why test for resistance?

Performing a faecal egg count reduction test (FECRT) can be a difficult to get right and can also sometimes mean that lambs need to be wormier than you would otherwise like, to ensure that the starting faecal egg counts (FECs) are high enough to be able to test the wormer.

However, there are several reasons why FECs and FECRTs are worthwhile.

Resistance can be species specific: Species do not tend to be specified in studies. Different worms could be active at different times of year but still targeted by the same drug.

For example, if you have white drench resistance in Trichostrongylus colubriformis (which tends to be more active in autumn) on your farm, you still might be able to use a white drench in the spring for a worm more likely to be active then like Teladorsagia circumcincta.

Not all resistance affects your bottom margin equally: Pathogenicity (the ability to damage the gut) is important to consider.

A strain of drench-resistant Cooperia sp. would cause the farm to count as white drench resistant, but this may cause less of an obvious growth check than if the resistant worm was Telodorsagia circumcincta.

Some wormers are more expensive than others: If you know which wormers work and don’t work at various times of year on your farm, you may be able to save money on using a wormer that doesn’t work or use a cheaper wormer that still does work.

Ignorance costs: Using an ineffective drench is very expensive because you pay twice – once for the drench and time to administer it and again for reduced growth rates.

How should I test for resistance?

One way farmers can establish wormer resistance on their own holding is through a FECRT (see table 2).

Other options such as drench tests, egg hatch assays and larval development tests are available and can be discussed with your vet.

Details of these can be found in the SCOPS (Sustainable Control of Parasites) manual.

The most important thing is the interval between dosing and re-testing the lambs’ FECs.

This is because all wormers – with the exception of moxidectin – only kill the worms that are in the lambs at the time and do not have a persistent action.

If the interval is longer than described, there may be worm eggs, but this could be the result of re-infection (ie worms that have been eaten in the first mouthful after drenching), and not because the wormer hasn’t worked.

1. Randomly select 15-20 lambs to go in either a control group (which doesn’t get wormer) or a treatment group.

Sheep must not have been dosed for 30 days or longer if moxidectin has been used – an average of 200 eggs per gram is recommended before starting the trial.

If at all possible, individually identifying the lambs so that individual lamb before and after samples can be obtained, is very useful.

2. FEC each group or individual to get a baseline egg count to compare with after the treatment. If you can track a group average, that’s fine but tracking individual sheep is better.

3. Leave a time period of seven days for Levamisole, and 14 days for Benzimidazole and Macrocyclic lactone groups.

4. Take a second FEC score on the groups.

5. If egg counts fall less than 95% in the treatment group then anthelmintic resistance is suspected. Use a vet/consultant to interpret your results.

A commercial sheep farm has found white and yellow drench-resistant Teladorsagia circumcincta this summer and will not use white and clear wormers in the early season.

Future drenches will, therefore, be yellow, orange or purple, with the latter two dependant on being prescribed by a professional.

The farm conducted its own regular FECs.

A group of 40 lambs (all individually identified with EID) had individual FECs taken after “looking wormy”. A clear, white and yellow wormer was each tested on a group of 10 lambs and a further 10 formed a control (untreated) group.

After the correct interval, lambs were penned and dung samples were collected and egg counts taken a second time, revealing a resistance issue in white and yellow groups (see table 2).

Subsequent speciation work conducted by the Animal and Plant Health Agency (Apha) found that all resistant worms were Teladorsagia circumcincta.

This is useful because predictions can be made about behaviour. T circumcincta lives in the abomasum and tends to overwinter there as arrested larvae (which get to a stage in their development and hibernate for the winter).

This means they have a slight head start over the other worms and are busy earlier in the season (as in this case: they were active in July).

The procedure will be repeated later in the year to target the other worm species.