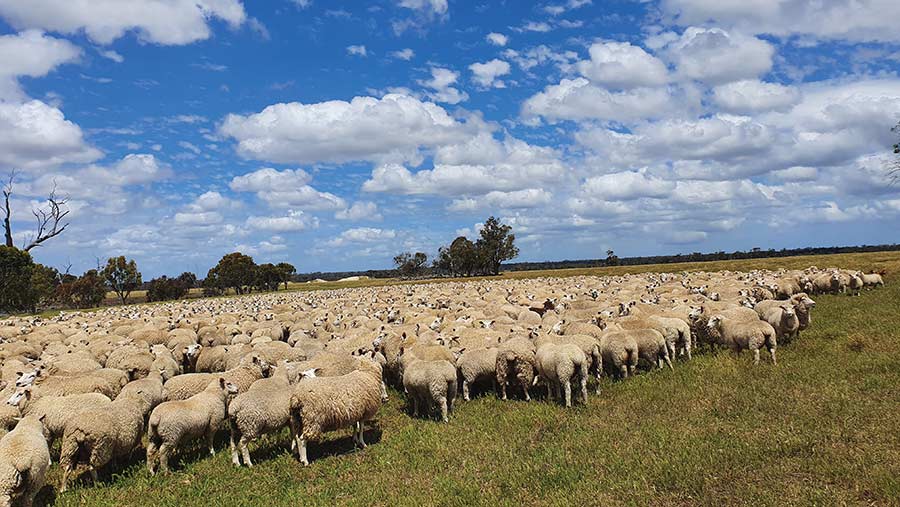 Switching to a self-replacing composite breed, selected for early growth and outdoor lambing, has boosted productivity on an Australian mixed farm.

The Slades produce over 10,000 lambs annually for the North American market and breeding stock in an outdoor lambing system.

The Greenline has improved maternal ability, lamb growth and weaning rates. This has been realised in a closed flock to minimise bought-in disease risk.

The Slade family farm is run by David and Lyn Slade, son Andrew, and their daughter and son-in-law, Vanessa and Scott Hillman.

David’s father, Phil Slade, a renowned mixed farmer, first came to Australia from Milton Keynes in 1967 and seized the chance to farm on a larger scale in Australia. 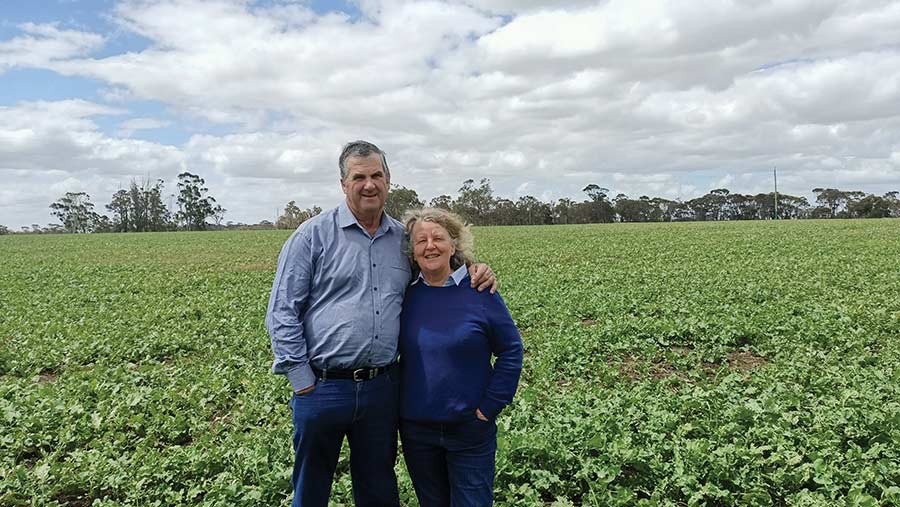 Phil brought the idea of cross breeding and the border collie sheepdog and was able to show Australians the merits of British farming techniques and breeding.

This included crossing the Border Leicesters to Merinos to create a cross-bred ewe, breeding for lamb production rather than wool, and building soil fertility on arable ground with livestock.

The relative affordability of land (£4,693/ha) in WA and the ability to turn a profit in an unsubsidised industry meant the farm was able to grow as other farms sold up.

However, about 20 years ago the Slades noticed that flock performance was faltering.

“Our system was to buy in Merino cross Border Leicester ewes annually, but we were also buying in ovine Johne’s disease, lice and worm resistance and foot-rot kept showing up,” says Mr Slade.

About 15 years ago, with ewe rearing rates at 110-115%, they travelled to New Zealand to visit several farms breeding composite sheep. They were most impressed with the philosophy of Kerry Dunlop at The Gree Farm near Winton on the South Island (see box).

Mr Dunlop had been instrumental in developing the Coopworth (Romney cross Border Leicester) and bred the Greenline by crossing Coopworths with East Friesians and Texels.

“We were impressed by the commercial focus and outdoor, low-input system the sheep were farmed and selected on,” says Mr Slade.

They bought semen for £16.50/straw, imported it and artificially inseminated about 400 ewe lambs to Greenline semen in 2005.

The subsequent year about 600 shearlings and their Greenline cross ewe lambs were bred to Greenline semen.

“After about eight years we were fully switched over to Greenline and Greenline crosses, and have not bought a single sheep ever since.”

The commercial flock generally sees lamb losses of 10-20% from scanning. An elite Greenline stud flock has reared 150-165% in recent years.

Furthermore, the Greenline ewe mature weight is 65kg, making it 15kg lighter than the Merino cross Leicesters the farm used to use, which has enabled the farm to lift stocking rates 10%.

The farm could scan 10-20% higher but breeds early in February, to ensure grass is available for lactating ewes. The Mediterranean climate means lambs are weaned in November because grass burns off and disappears for five months of the year.

What the Slades learned from New Zealand

1. Monitor and manage body condition all year round

Grass only grows from May (late autumn) to November/December (spring/late summer) and burns off by Christmas at Glenridge Park. Hay and homegrown cereals make up the ewes’ feed most of the year.

Expense is saved by weaning lambs on to hoppers and cereal stubbles when grass growth stops. Lambs are finished on a total-mixed ration based on clover and rye hay, lupins and cereal at 16% protein and 12% ME.

Trace elements are supplemented to ensure ewes are set up well to perform. The land is deficient in most trace elements.

Because labour cost is high (£25/hour), in normal years it only makes sense to run 3,000 ewes per labour unit. Machinery can be quickly paid off with economies of scale.