Moving to forage-only finishing and outdoor lambing has ensured a commercial sheep flock remains a key feature of an expanding mixed farm business.

After 10 years of intensifying grazing regimes, including moving to all grass wintering (cell grazing) in 2013 and minimising spring vet and med costs through outdoor lambing, Michael and Graham Rutherford are now addressing fixed costs.

The pair, in partnership with father George, have used AHDB Stocktake and the Newcastle University’s Farm Business Survey (FBS) to rigorously scrutinise the fixed costs of their business, which yielded a net margin of £8 a ewe in 2014.

As costs have been cut, labour has been made more efficient at View Law, Longhorsley, with the brothers adding an 1,800-head outdoor pig fattening contract and store cattle and cattle rearing sidelines. 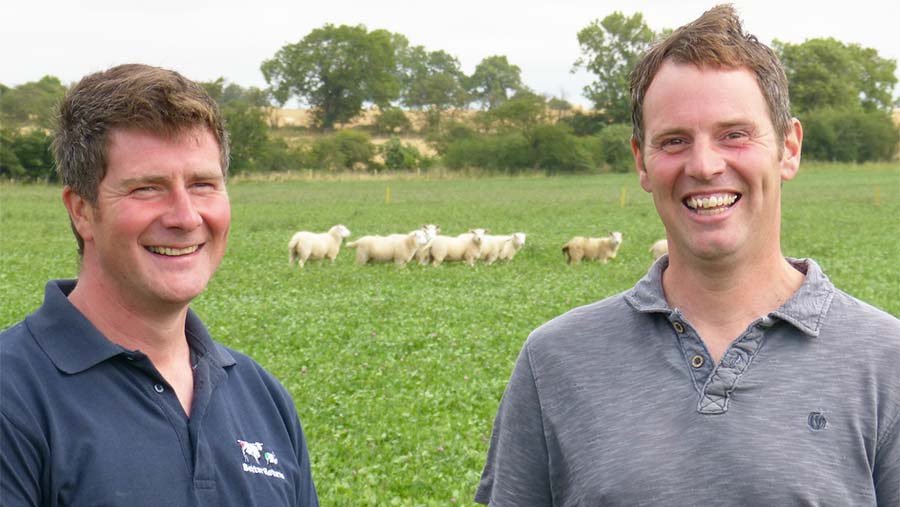 Previously the farm had a 400-head North of England Mule flock.

This was changed to Lleyns and the flock expanded to over 1,600 head. Lambing was moved outside and sheep were outwintered.

Taking on a mortgage for a neighbouring farm meant fixed costs needed reducing.

A more efficient flock gave rise to other enterprises (cattle, pigs) and a bigger flock meant labour per ewe decreased. Analysis on a per animal basis helped further reduce cost of production

A per hectare analysis focuses on fixed costs, with more emphasis put on contracting costs.  This followed the sale of two tractors to be replaced with one, the sale of a pick-up and a plough.

The low cost, extensive sheep system was put in place at the Rutherford’s 186ha home farm View Law in 2005.

More cost scrutiny came in 2010 when they took out a mortgage on neighbouring 150ha Blackpool Farm.

Graham, Michael and father George target £10 a ewe profit this year from a lamb price of £77.

The system requires Michael and Graham to manage around 850-900 sheep each, with no outside labour currently used on the farm.

“We’re full time farmers now but this hasn’t always been the case,” recalls Michael, who previously had a contract sheep shearing run with Graham while farming at View Law on a part-time basis.

“We also ran a marquee hire business and did fencing work too but we both wanted to farm full time so we turned View Law from a three-quarters arable farm into a three-quarters pasture farm and took the opportunity of Blackpool Farm when it came up next door.”

Now two farms are run as one holding, with the terminal flock at Blackpool and the replacement breeders at View Law under one flock number.

Everything is lambed outdoors from 14 April (previously 1 April with the Mules) after ewes are set stocked at 4.5-5/acre.

Lleyns were chosen because the Rutherfords thought they could fit an organic system, breed new replacements and not need concentrates.

“We only had one prolapse each this spring and pneumonia and twin lamb disease have not been a problem,” says Graham.

A key cost saving exercise has been wintering sheep on grass, which has saved £10,000 on flock cost. 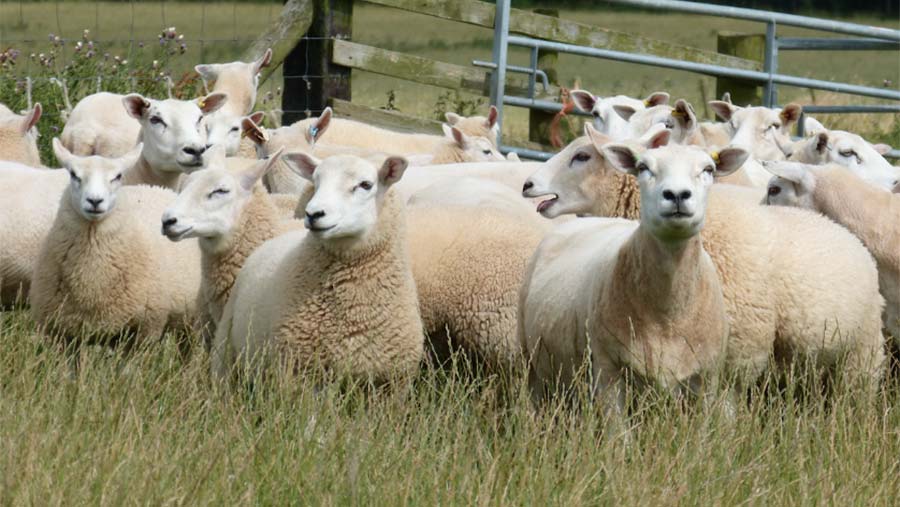 Lleyn sheep were chosen at View Law for the organic, low input system and now number around 1,750 head © Michael Priestley

See also: How to get good returns from milking sheep

“Rather than having the contractors make silage for the sheep, we can either cut that cost out entirely or make half the number of bales to support a heifer and store cattle sideline in the winter,” says Michael.

“At £10 a bale we halve our overall cost if we can feed 500 bales to cattle instead,” says Michael, who oversees the terminal half of the flock, currently put to narrow headed/easy lambing Texels, Sufftex Ss and Sufftex Ts.

The 50 or so organic cattle they run through the year have achieved a small profit of around £20 a head – much better than average performance, which is at a loss of over £90.

Below average fixed costs are partly down to fuel costs falling £2.15 a ewe between 2014 and 2015 to £1.75 and depreciation dropping £2 a ewe to £3.70 after the decision to trade in two tractors and the farm pick up.Graham and Michael each have one quad bike.

“What we ended up with was one more specialised tractor after trading the other two in,” explains Graham, who has put more emphasis on contractors in recent years.

“We sold the plough and drill around three years back as well. The latest thing we are considering is our combine harvester. This is handy to go out and harvest the organic oats as and when they ripen in September and we can contract harvest for neighbours, so we still have it for now.”

Newcastle University FBS accounts, which are carried out free of charge, show this decision reduced depreciation from £107/ha in 2013 to £69/ha in 2014, although contracting costs have crept up and are above average as a result.

One way the Rutherfords may lower variable and fixed costs further is through using Easy Care sheep to reduce clipping costs.

Graham believes time can be “better spent” in the spring and has bought 300 Easy Care ewes in the since 2015.

“We have a poultry unit coming next year which will hopefully be the final piece in the puzzle to helping farm profitability and removing the need to clip sheep could be of help in batching and rotating of the flock in paddocks at spring time,” he adds.

Flock performance is heavily scrutinised against 43 farms in a lowland grazing group within the FBS.

“Now we need to improve our output to get a better bottom line,” explains Graham, who manages the maternal/replacement half of the Lleyn flock. 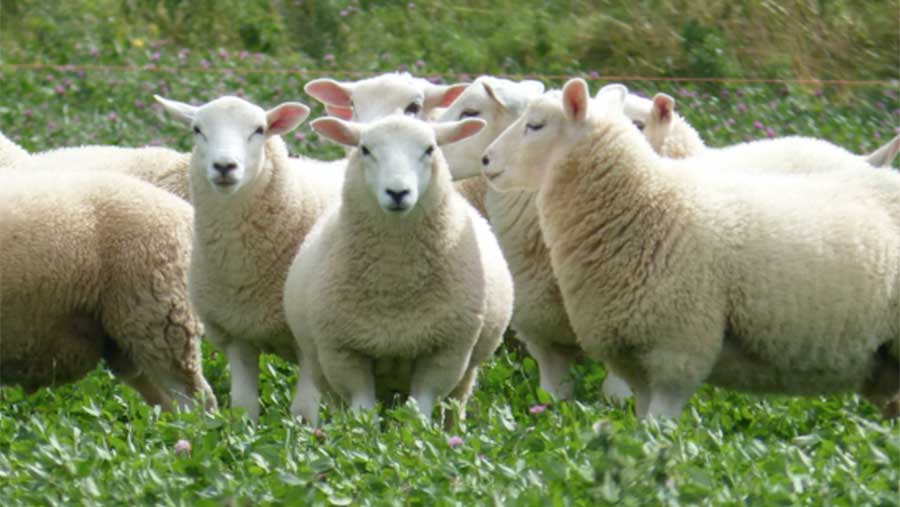 “Looking at farm benchmarking we’re doing with the university, it seems that variable costs tend not to vary.

“However, there seems to be huge variation in fixed costs of businesses and we are hopefully making progress on this front, although we acknowledge there is still a long way to go, with labour efficiency being a key area.”

Likewise, lambing outside means lambing and rearing figures can vary.

“Set stocking around 400 gimmer lambs and 100 leaner ewes (BCS<3) has been one of the changes during the trial and error of tupping on cell grazing,” says Michael.

“The other change has been shortening rotation length from two days to one day.”

A typical year sees around 300 ewe lambs tupped at 40kg or more when weighed and sorted in October.

The tup goes in on 19 November for two weeks with lambs and five weeks with the mature ewes, which weigh around 70kg.

Pleasing margins of £8/ewe in 2014 suffered in 2015 when lamb prices dropped by £9 a head and an abortion issue resulted a spike in lamb mortality to leave a breakeven margin of £0.63 a ewe.

“We had enzootic abortion and also a campylobacter issue,” explains Graham.

“We have vaccinated for this since and also tried mixing anything that aborted with ewe lambs to pass campylobacter immunity. We understand that this helps immunity transfer through the flock year on year. Campylobacter seems to flare up once every four years or so when animals become naïve.”

*not all lambs are sold – some kept for breeding

** net margin accounts for a wage for Michael, Graham and George and mortgage payments.