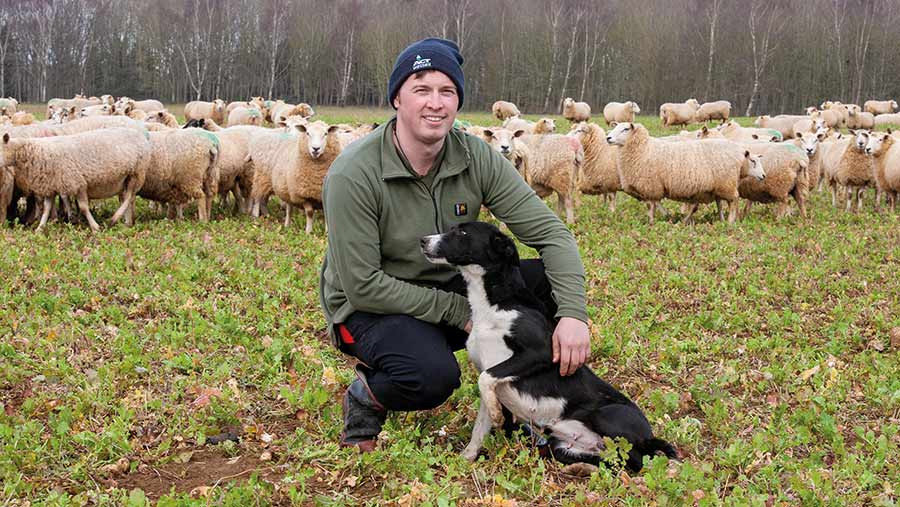 A major system overhaul on a lowland estate has lifted scanning rates and cut bought-in feed costs by £6.28 a ewe over the past five years.

The team at Overbury Enterprises, near Tewksbury, Gloucestershire, is aiming to rear 1.75 lambs a ewe this year from its 1,100-head cross-bred flock after scanning at 186%.

We asked the Overbury Estate team how they achieved this.

The estate’s farming systems have been evolving since farm manager Jake Freestone arrived to manage Overbury Farms in 2003.

Since 2014, the farm has made an increasing commitment to holistic, regenerative agriculture and no-till systems.

The arable and sheep enterprises have become more integrated under the guidance of Mr Freestone and head shepherd Tom Chapman, who joined the estate in 2019.

This has allowed sheep to graze arable cover crops – turnip and vetch mixes – rather than overgrazing grassland through the winter, freeing up quality spring grazing for lactating ewes.

This means permanent pasture for lambing (307ha or 758 acres) and clover leys (25ha or 60 acres) can be given sufficient rest over winter.

If rested for 90-100 days, the better parks can supply lactating sheep with the energy they need, while ewes on poorer ground get energy blocks at one to 30 ewes.

While on the cover crops, sheep are introducing organic matter, manure and dung to fields.

Average soil organic matter levels have risen by 1.7 percentage points (0.2 a year) since 2014 to 6-10%. Cereal yields have been maintained while cutting nitrogen use by 15%.

Lambing outside on rested pasture has allowed major input savings to be made.

As well as feed costs falling (see table), about £15,000 is saved on hay and straw each year. Labour costs have also fallen, from lambing with five lambers inside to three outside.

Antibiotics use has fallen 20% to 8.35mg/kg in recent years.

The estate lambed outside for the third time this year. The fittest half of the sheep were lambed outside the first year as an experiment, but now only problems are brought inside.

Lambing dates have not altered, with the flock starting on 1 April for two cycles.

Last year’s concentrate buying was limited to 1t of nuts for pens and 2t of lamb creep for 26 pet lambs.

Rumenco energy blocks are now used to supplement mobs of ewes on rougher, lower-quality grazing, from when ewes come off cover crops for four weeks pre-lambing until grass growth gets properly going in May. Previously, they fed concentrate through a snacker.

“The blocks are great as a safety net,” says Mr Chapman. “They are three times dearer per tonne as cake, but you use a third of the amount. Rather than a noisy quad bike and sheep running to feed, the ewes eat when they desire and there is less mismothering.”

Historically, the flock bought in North of England Mules, but this brought disease onto the farm via replacement females.

Other issues such as contagious ovine digital dermatitis (Codd) were also brought into the flock.

The team is in regular contact with vet Phillipa Page of Flock Health. She uses blood testing on thin ewes and postmortems to gauge the level of disease in the flock as part of a flock health plan she developed with the team.

Monitoring body condition and drafting out thin ewes to sell as culls at a body condition score of 2 or below (despite being on good grazing) helps weed out the sheep with production-limiting diseases.

The downside to this is a higher replacement rate and a contraction in flock numbers from 1,300 to 1,100, but Ms Page says getting a cull value is better than paying to feed unproductive sheep and for incineration costs.

As part of the flock health plan, the team has put more focus on body condition scoring. This constantly influences grazing and supplementing decisions throughout the year.

The four key scoring times are weaning (at 11-13 weeks), pre-tupping, lambing and scanning.

With the help of a team of three good dogs, Mr Chapman is trying to rotate the sheep more regularly and rest grass for 30 days throughout the summer. This is helping to maintain pasture quality and keep condition on ewes.

5. Investing in a flock health plan

Investing in a comprehensive flock health and vaccination programme has rewarded the estate with higher productivity.

Each year, the flock vaccinates for enzootic and toxoplasmosis abortion, foot-rot, and pasteurella and clostridial disease. It costs £8.32 a ewe (£9,200) this year.

The team sees this as “good vet spend”, rather than getting the vet onto the farm when problems arise.

Money is spent on postmortems to keep an eye on health issues and testing wormer efficacy.

A known efficacy of 100% is achieved on group three macrocyclic lactones (clear wormers), so these can be used on lambs this summer, depending on weight gain data and faecal egg counts.

Ewes are not wormed as they typically build up an immunity to worms on the farm. Levamisole (yellow) wormers will be efficacy-tested this spring. White wormer (albendazole) is used on lambs to treat nematodirus.

A farm trace element audit (soil, water, forage, ewe bloods) revealed a selenium, cobalt and iodine shortage. Ewes and lambs are now bolused to address deficiencies and sheep are monitored through the year.