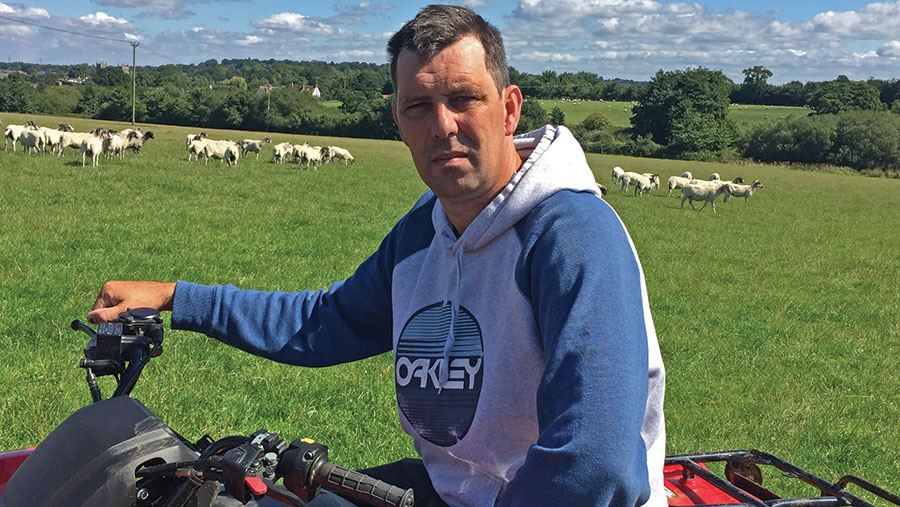 John Wood, who farms at Merley Hall Farm in Dorset, made the switch from antibiotics to vaccination after 100 ewes from the 2,000-head flock aborted three years ago and as a result has seen a drop in his antibiotics bill.

“On the first day of lambing, we noticed one of the ewes had aborted, by day two we had another half-a-dozen and by day three we’d had about 25 abort. When the lab confirmed it was enzootic, the only advice we were given was to treat the whole flock with antibiotics,” explains Mr Wood.

Enzootic abortion of ewes (EAE) is caused by the bacteria Chlamydia abortus and is responsible for 52% of sheep abortions in the UK.

To treat flocks at the time of an outbreak, an injection with a long-acting oxytetracycline (Oxytet) is used on all sheep to reduce the risk of further abortion.

Ideally, this should be used once tests confirm a  diagnosis, which is what happened in Mr Wood’s case, but many farmers tend to treat the whole flock before receiving results.

In recent years, the rise in a “just-in-case” approach to administering antibiotics where no abortions have occurred has risen adding to the overuse of antibiotics in the sheep industry.

Despite administering Oxytet to all of his flock, Mr Wood found about 100 ewes aborted by the end of lambing and he continued to see abortions the following year, although the number reduced.

“The antibiotic seemed to slow it down, but once EAE is there you might not know about it until next lambing when ewes abort. With antibiotics, you have to continue to jab the ewes, so for the two years after we spent about £2,000/year on oxytetracycline alone to prevent it from happening again.”

As costs started to rack up, Mr Wood made enquiries about vaccinating and was surprised to find it was cheaper than he expected. With vaccinations ideally taking place four weeks prior to tupping, Mr Wood decided it was the right time to change.

“You only have to vaccinate the ewes once in their lifetime, so it actually works out cheaper than using antibiotics.

“To vaccinate the whole flock it cost me the same amount as it did to jab the ewes for the two years after the abortion storm.

“If I hadn’t switched to vaccinating, I’d have spent double that by now administering precautionary antibiotics,” explains Mr Wood.

You only have to vaccinate the ewes once in their lifetime, so it actually works out cheaper than using antibiotics John Wood, sheep farmer

Since switching to the vaccination, he has had a successful year and has seen no abortions at lambing in February and March.

Now, with ewes being both bought-in and replaced on farm, all will be vaccinated before they enter the flock by the end of the year.

As part of its commitment to sharing best practice advice, AHDB Beef & Lamb has been working with industry organisations to ensure vets and farmers understand the importance of vaccinating to guard against abortion.

Liz Genever, senior scientist at AHDB Beef & Lamb, says: “It is great to hear that John has made the switch to vaccination from antibiotics. It was a sound financial decision, both in terms of reducing vet and medical costs and reducing lamb losses.”

“The removal of the oxytetracycline treatment from this flock will also reduce his antibiotics use by about six milligrams per production correction unit. We are still seeing about 10% of sheep farmers injecting ewes near lambing and some of these could easily move towards vaccination.”

By Fiona Lovett, RCVS-recognised specialist in sheep health and production

A practice that is still too common among sheep farmers is the use of whole-flock antibiotics treatment of ewes in late pregnancy to control enzootic abortion. As a routine practice, this is completely unacceptable, as there are effective vaccinations on the market.

Vaccination is much better for the long-term health of the flock, because it reduces the number of affected ewes and reduces shedding of the chlamydia bug.

In contrast, antibiotics treatment for routine abortion control is a short-term sticking-plaster approach that is a reflection of poor flock health management.

Apart from being a much more responsible use of medicines, vaccinating instead of using antibiotics to control abortion is very cost-effective – an enzootic vaccine is only £2-£3 a ewe for a once-in-a-lifetime jab.

Over the life of a ewe, this costs the same or less than repeated antibiotics treatments.

Enzootic abortion is still the most commonly diagnosed cause of abortion and stillbirths in the UK.

Despite this, we know that there are only about a million doses of enzootic vaccine sold each year, compared with the 3.5 million replacement ewes that enter the national flock.

Any flock which buys in ewes is at risk of introducing EAE and would be well advised to vaccinate for cost-effective prevention rather than risk the expense of disease.

The worst thing about EAE is that ewes that pick it up one year will not abort until their next pregnancy, so farmers who had some abortions at lambing this year may already have ewes that will abort next year.

The Sheep Veterinary Society Good Practice Guidelines clearly point out to vets the occasions where targeted antibiotics treatment may still be useful – that is in a flock experiencing an outbreak or if there was a confirmed laboratory diagnosis of chlamydia in the immediately preceding year.

Ewes need to be vaccinated at least four weeks before they go to the ram, so now is the time to think about vaccination to effectively protect naïve ewes from picking up EAE next lambing time.